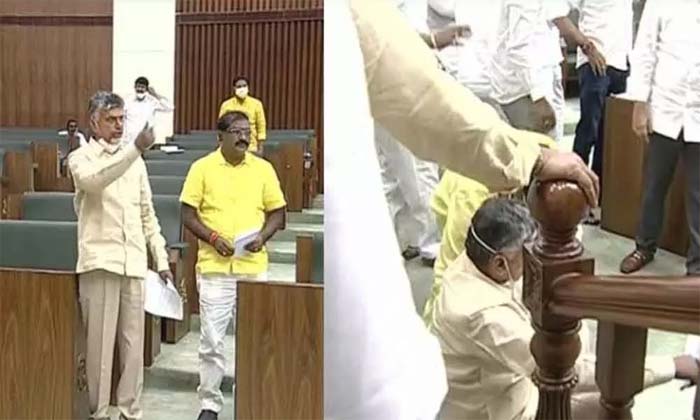 Amaravati: Thirteen TDP members, including the leader of the Opposition Nara Chandrababu Naidu, were suspended from the Assembly for the day by Speaker Tammineni Sitaram on Monday. Soon after the winter session started the TDP members staged a walkout as a protest against passing Panchayat Raj Bill without any debate. Later, when Chandrababu Naidu wanted to speak on the plight of the farmers and the flood affected persons, he was not allowed by the Speaker since TDP member Rama Naidu was speaking at that time. A miffed Chandrababu Naidu sat on the floor along with his party members  for a  dharna before Speaker’s podium.

Perni Nani, Minister for Legislative Affairs, has read out the names of the TDP MLAs to be suspended since they are obstructing the functioning of the House. Speaker Sitaram suspended the MLAs named by the minister.

Earlier at the Business Advisory Committee meeting, Atchennaidu, who attended on behalf of the TDP, argued that the session should be conducted for ten days  since they are a number urgent issues to be discussed. But the ministers who were there said since there is carona on the rampage and there are members past 60 years, the government thought the session should be confined to five days. Ultimately it was decided to end the session on December 4.