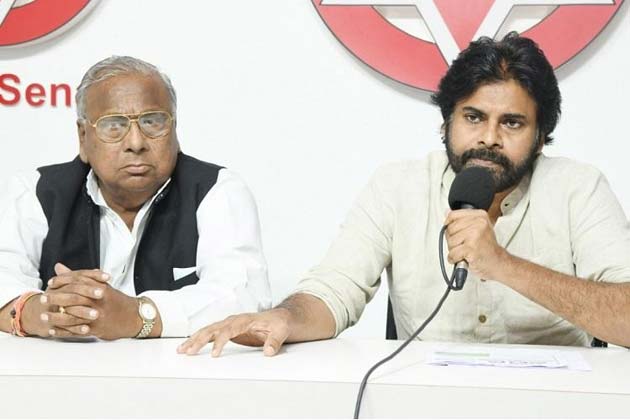 Hyderabad: Congress senior BC leader V. Hanumantha Rao (called VH by his colleagues)  suggested a name to bring congress party alive in Telangana other than the name of Revanth Reddy. He said if Jana Sena chief Pawan kalyan joins congress, he would suggest his name for PCC chief to the party’s national leaders.

On the eve of Vangaveeti Mohan Ranga Vardhanthi, Hanumantha Rao said that  Kapu community which is nearly 27% in both Telugu states  needs to come to  power which is possible by the popular actor-turned-poitician Pawan Kalyan who has considerable fan following.

WIth the news circulating from 10 Janpath that Revanth Reddy’s name will be announced as TPCC chief, VH hit out hard on the issue. As per VH, Revanth has RSS background and leaders like him can’t work under Ex-RSS candidate. Revanth originally belongs to RSS background and moved to TDP and destroyed it from root level in Telangana, now he is planning  to destroy congress too, VH said with anguish.

Manickam Tagore took money and gave wrong report to central leaders, he alleged. I will ask Sonia and Rahul to rethink on the decision. Team in Delhi is misleading high command, I will tell the truth if they give appointment to me, VH added.

Manickam Tagore who came to know about allegations made against him by VH, asked for a detailed report from Telangana congress leaders. VH may receive a show-cause notice soon  as per congress sources. If Revanth Reddy’s name is announced as TPCC chief, certainly we can see rise in dissidents’ voice which can lead to congress split as per political analysts.

High Command is keen on Revanth Reddy as TPCC chief which will be announced officially in a few days. Komatireddy Venkat Reddy will be offered a key position in the AICC, but rumours widely circulating  in social media indicate that  his brother Rajagopal Reddy is all set to  join BJP sooner than later.