Three recent observations of Supreme Court remind simmering citizen activism in the country as 2020 comes to an end after a series of agitations across the country and by wider sections. These judicial reminders are both to those in power and the citizen groups with equal significance.

On December 18 the Chief Justice of India stepped in as farmers agitation outskirts Delhi reached 23 cold day and asserted that farmers have a right to protest and asked the Government to hold the contentious three laws and that protests should not be obstructive. The chief Justice even suggested idea of an independent committee as a way out of the impasse while protests go on in the meanwhile. A week before, on December 7, 2020, a two-judge bench of Supreme Court reminded that “political speech cannot be a ground for Penal action” and that “political speech relating to Government policies requires greater protection for preservation and promotion of democracy”. Earlier, in 2018, a three-judge bench of Supreme Court including the chief justice, reminded while hearing arrest of five activists, that “dissent is the safety valve of democracy”. Taking pressure cooker view of citizen voice, the justices advised the authorities “not to allow pressure cooker burst”. It was a visionary observation.

Had the Government taken note of these observations, it would perhaps have not rushed or pushed through contentious Bills in the Parliament one after another in the name of reforms disregarding dissent and apprehensions, particularly of stakeholder – citizens. In this process the party in power might have temporarily tightened the grip but in the process they have also raked or provoked citizen activism. Reasons for this “taking for granted view”, despite judicial reminders, are multiple and they are not to do with any one political party; it is important that this phenomena is understood better.

First, citizen dissent is not necessarily same as that of bickering between political parties. And yet the leaders in power dub apprehensions of even stakeholders as motivated or as instigated by parties in opposition. Dissent and agitations are often presented as misguided or misled. This has become a routine response of leaders in power. And fail in the process to reason out. Government’s insensitivity fails them to differentiate the interests of citizen groups from political parties. This has become a phenomena no matter which party is in Govt. Without coming out of this fix of political leaders, citizen concerns and dissent can never get fair chance.

Second, a continuing phenomenon is not to concede that citizen activism is essential for realising developmental goals. Instead, citizen activism is viewed by political leaders as a threat. A number of studies, even by Government sponsored ones, have indicated over the years that lack of local participation or citizen involvement is one reason for not accomplishing many of the targets and goals of development schemes.

Third, decline in representative methodology being followed and character of the elected has pepped up citizen to come forward. Also, grievance redressal mechanisms, despite hype by the Government, remain exaggerated or unreliable. The more the gap in this regard citizen activism becomes a compulsion. But this aspect is more often ignored conveniently by those in power even when some examples remind the significance of citizen involvement as in the case of Swatch Bharat or tree plantations, for example.

Fourth, another undercurrent for Government taking “granted view” of citizen is dependency syndrome that successive Governments have perpetuated.  This is both by the Government at the Union and in the States and as if they are in competition. They push citizen into a regime of free-bees and doles, even more provocatively prior to periodic polls, in such a way that political parties wish citizens remain in their grip which means preferring citizens remain passive.

An ethnographic analysis of over 125 citizen agitations during 2018-20 in over 30 cities brings out why these agitations tend to get viewed as “obstructive” when in fact they are for a common cause by stakeholder citizens.  Because there is no scope for orderly gatherings or meetings in a civilised way, some agitations do send out such signals.  Once value of citizen’s feedback is recognised, citizen groups will be provided with facilities for holding the meetings more decently, respectably and responsibly.  My 2019 book,“Citizen Activism in India”, is based on first-ever field research and analysis of hotspots of agitations and the consequences. 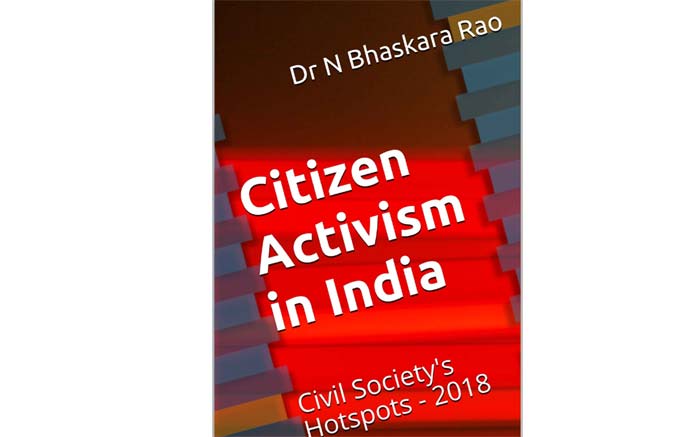 For years, for example, Jantar Mantar in New Delhi has been a busy venue for citizen arguments, sit-ins and protests, some days crowded with more than a couple of different groups protesting with altogether different agenda. And it has become a place of recognition of citizen’s cause in view of the kind of attention the venue gets particularly from the news media.  Dharna Chowk in Hyderabad is another example.    In the absence of such venues many cities witness agitations in front of collectorates, secretariats, assemblies, etc. Peoples Plaza on Necklace road in Hyderabad was an initiative some years ago towards offering a more respectable place for citizens to come together for a more civilised ways of deliberating, dissenting and disseminating.

But 2019 had witnessed an interesting interlude! Two political leaders who were also beneficiaries of Jantar Mantar in Delhi and Dharna Chowk in Hyderabad, thought that by depriving these avenues to citizens any further they could curb or snub or make citizen agitations difficult. No sooner, some other cities too followed. Even Ramlila Maidan was about to be curtailed. In Hyderabad the Dharna Chowk was shifted to outskirts, so that more citizens cannot attend and will not get the attention.  It was intervention of the court and even the Human Rights Commission that saved the situation and reversed and that in no time triggered more such venues for citizens cropping up as Dharna Chowks in many other cities like Vijayawada.

Why stakeholder citizen groups on agitation should think of road roko or to interrupt rail traffic. When they fail to get attention of the public, press and the authorities and response of the concerned, easiest way is to take to such options however risky that may be ending up sometimes in police firing or custody. If, on the other hand, citizens are provided with venues where they could get some minimum facilities and the attention and also an orderly engagement, they would not think of such locations and end up helter-shelter. For example, had the Government allowed farmers in the early days of the agitation to demonstrate at a larger venue such as  Ramlila Maidan in Delhi as it was used for many such occasions earlier, perhaps there would not have been a need to provoke farmers with barricades, water cannons, etc.

Such clashes vitiate an amicable atmosphere. Nasik to Mumbai Long March was another example of ill treating agitating farmers by deliberately depriving them with minimum facilities. As a consequence of not having proper place, citizens tend to intrude or avail academic campuses. That is how academic campuses have become venues for agitations interrupting academic discipline and roping in students.

Designate a place for activism

Peoples Plaza in Hyderabad was supposed to be an early organised venue for citizen activism.  If religions, businesses and such other interests are provided space or venue, why citizens are not with specific places to meet as and when and interact more peacefully, more responsibly without interfering with civic life. And instead of spreading agitations into multiple locations, the local authorities should designate a place for citizen conclaves. But these should not be away from prominent location where public, news media and the authorities could promptly get to know and attend. This way the Government could even engage them into negotiations.

A new phenomena in recent years is the party in power taking to agitational course by occupying the space that citizen were using for Dharnas. In the last two years, ruling parties and Chief Ministers of five states, for example, themselves took to street demonstrations.   In 2018, the ruling party in Delhi state took to agitations a few times for all kind of differences with the Union Govt.

Public spaces like PWD grounds which are hither to availed by citizen activists are being converted into places for worship or statues of local political leaders or and then declare such public place as a park and then make encroachment easier for local political dada’s,and thus deprive citizen of a public venue. Thus space for citizen is shrinking in many cities. And yet the same time India is witnessing unprecedented citizen activism signalling a new turn in setting public agenda and in public policy making.

Prime Minister Modi while laying the foundation for the Central Vista in New Delhi last fortnight said that the new Parliament consolidates democracy in India. But what sustains democracy more is the way parliament functions.  But even more, democracy deepens and sustains when citizen activism is allowed full play to rejuvenate and sustain the Republic of India.   This is what the Supreme Court’s periodic reminders of the significance of citizen activism is all about. Citizen activism on its own does not threaten or destabilise as ruling parties tend to showcase.

Justice P N Bhagwati, proponent of Public Interest Litigation (PIL)idea decades ago and before he had become the Chief Justice of India, envisioned about citizen activism as early as in 1976 and warned that “Indian people are very patient but despite their infinite patience, they cannot afford to wait for 25 years to get justice …there is a limit of their tolerance….”.Much later (1993-96) I was fortunate to be a functional associate of Justice Bhagwati when he was Chairman and I was the national convenor of India’s first Social Audit panel. The way citizen activism is gaining ground last couple of years, thanks to the farmers in particular, can we expect revival of a regime of “We, the People” from 2021?