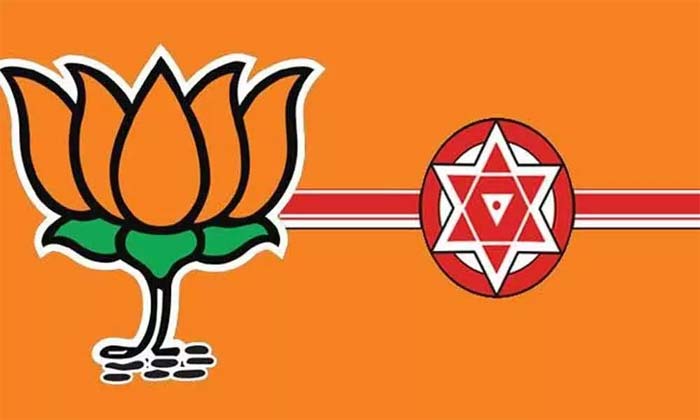 Tirupati: On Saturday, APBJP president Somu Veerraju gave clarity on Tirupati bypoll and his party’s stand. As per him, BJP will finalise candidate and its ally Jana Sena will support their candidate in upcoming by poll. What is surprising is the fact that so far there is no statement from Jana Sena chief on the BJP stand. Jana Sena chief Pawan met BJP top heads in New Delhi a few days ago and expressed his view that his party will contest in Tirupati. Later official statement was released that a committee will be formed by BJP and Jana Sena for future course of action for Tirupathi bypoll.

Now the news that BJP will contest has put the Jana Sena cadre in dilemma. BJP held a huge rally on Saturday at Tirupati in the name of ‘Sobha Yatra’ where party’s national leaders like Muralidhar Rao, Chhattisgarh Ex CM Raman Singh addressed gathering. Somu Veerraju, who was in Tirupathi for a few days with constant meeting with cadre and party leaders at district level, took the opportunity to come up with a statement that BJP candidate will be in the fray for upcoming bypoll for the Lok Sabha seat.

The win in Dubbaka and GHMC elections made BJP over enthusiastic without considering the ground realties in Tirupati. BJP in 2019 elections stood in 6th place securing only 25,000 votes. First was the YCP, second place was occupied by the TDP, 3rd place was secured by NOTA, 4th was of the Congress, 5th was by BSP-Jana Sena alliance and the margin between the winning candidate and tbe BJP candidate was more than 7 lakh votes. BJP ‘s story in Andhra Pradesh is entirely different from that of Telangana. It happened in 1998 once, when BJP allied with TDP which gave two Lok Sabha seats in coastal Andhra. Now the scenario is different and Veerraju is not that much of a political figure who can pull mass crowds. He is trying to attack both TDP and YSRCP in his speeches to prove BJP as an alternative to them. BJP has to sweat it out more and wait for time to prove as the main opposition to YCP. It is better for them to leave slogans or statements sayind that they would repeat Dubbaka and focus on local issues to gain foothold in Andhra, which is one of the states left by them unconquered in South India.

It is difficult to understand the words of Jana Sena chief who doesn’t show any consistency and does not stand by his word. During 2019 elections, he said on record that he will stick onto politics rather than film shootings. He changed his mood post elections and once again on film shoots, giving politics a secondary inpirtance. His recent visits to districts affected by floods, interaction with Amaravti farmers, prove the same thing. He has no clarity with whom to ally and contest in elections or not. He came up with alliance with TDP- BJP, CPI, CPI (M), BSP and no party was left for him now for future elections. Only party is BJP, which is just holding Jana Sena on tentehook, making it to move forward. Party, which said will contest in GHMC elections but had to drop the idea. As far as Tirupathi is concerned, the BJP does not show the respect that is due to an ally. It has little hold over vote bank in Tirupathi when compared to BJP, but the decision of leaving the seat to ally is not convincing to the Jana Sena cadre.

Speculations is rife that Jana Sena leaders may take a serious decision on the issue to move ahead. They claim that BJP contesting is just to give way for YCP win.