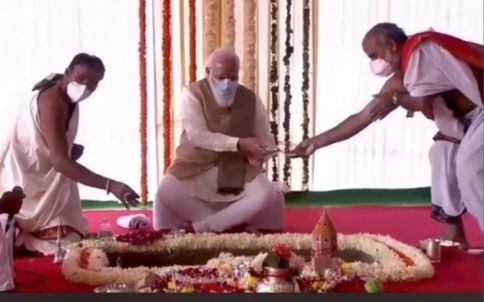 New Delhi: In the presence of various political leaders, cabinet Ministers, Ambassadors of different countries, PM Modi laid the foundation for the new Parliament building on Thursday at 12.55 pm. This was followed by ground breaking ceremony and building is expected to be completed by 2022.

PM Modi said that new building will witness making of “Atmanirbhar Bharat”. Old Parliament house gave direction post Independence to the nation and new one will witness making of self reliant India. New Parliament building will include several things which will help in increasing efficiency of MPs and their work culture with new technology, Modi said addressing gathering after Bhumi Pujan.

PM recollected his memories and moments of life when he had the opportunity to come to Parliament House in 2014, for the first time as an MP. He said that before stepping into temple of democracy, he bowed his head and saluted the temple of democracy which is unforgettable.

It is a four storied building to be constructed in an area of 64,500 sq. m at a cost of Rs. 971 crore. There will be approximately 888 seats for Lok Sabha members and 326 seats for Rajya Sabha Members and Central Lok Sabha Hall can accommodate 1224 members in new building.

According to the Speaker, sessions of both the Houses of Parliament in new building will begin as a mark of completion of 75 years of India’s Independence, in year 2022. HCP Design, planning and Management Private Ltd bagged the contract for the new Parliament building. There will be a separate entry/access gates for PM, Rajya Sabha Chairperson, Lok Sabha Speaker, for MPs and for public in new building.

Paperless office will be created with the help of digital interfaces. Original constitution will be showcased in a separate Constitution Hall. Chairpersons of Parliamentary standing Committee, floor leaders were present along with PM for the Bhumi Pooja.