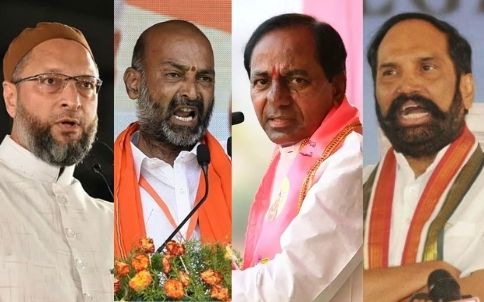 Hyderabad: The ruling TRS received a drubbing it was fearing. Chief Minister K. Chandrasekhar Rao (KCR) should thank his stars for advancing the polls after learning a quick lesson from Dubbaka debacle. Had he allowed two months to pass to hold the elections according to the schedule, the BJP would have become the single largest party instead of the TRS.

The Dubbaka streak had continued into Hyderabad with the BJP leaders following the same strategy of aggressive engagement. TBJP chief Bandi Sanjay appeared irresponsible when he said his Mayor would order surgical strike on Old city of Hyderabad to get at the Rohingyas and Pakistanis who are living in the city. His comment had provoked Asaduddin Owasi, the MIM chief, who asked the BJP to conduct surgical strike on China if it had guts. Then his younger brother Akbaruddin asked the government to remove the memorials built for former Prime Minister P.V. Narasimha Rao and former chief minister N.T. Rama Rao in the necklace road on the banks of Hussain Sagar. It was the turn of Sanjay to tell the MIM leader that his party workers would not take more than two hours to dismantle Darusslam. Municipal Administration Minister K. Taraka Rama Rao (KTR) asked people to ignore the mad caps talking about religion and vote for TRS candidates if they are keen on peace and tranquility in Hyderabad. One would think that there was a method in the madness. Things worked out the way BJP and MIM leaders wanted.

It is important for political parties and leaders to understand the electoral defeat as well as win. In fact, understanding victory is more important than knowing the reason for losing the battle. KCR did not seem to have understood his party getting a good majority in the 2018 assembly elections. When he was struggling for a campaign theme in 2018, TDP chief Chandrababu Naidu helped him, without knowing it, by visiting Khammam and Hyderabad to campaign for the TDP-Congress alliance. KCR got the inputs he was looking for. He asked the people to choose between rule by Chandrababu Naidu through remote control from Amaravati or his direct rule from Hyderabad. People who were thinking of voting for the BJP or the Congress or the TDP had abruptly changed their mind and focused on voting en masse for the TRS. KCR might have thought that it was because of his four-and-half-years rule and his charisma that his party won handsomely.

In the 2019 Lok Sabha elections, there was no help from Chandrababu Naidu who did not campaign and the Opposition parties in Telangana, the BJP and the Congress, had each got four and three Lok Sabha seats respectively. That was the second warning which KCR ignored. The third warning was when the party lost Dubbaka bypoll in spite of vigorous campaign by his nephew and finance minister, T. Harish Rao. He sensed the danger and had gone for elections in a matter of days after Dubbaka result was announced. He had, thus, averted an awkward situation where the ruling party would have ended up second or third.

If the BJP understands its winning 48 seats were due to the religious rhetoric that Sanjay had indulged in, it would be a grave mistake. It was because of the anti-incumbency sentiment against the TRS government that the BJP has got those many seats. It was possible because they were convinced that the BJP was an alternative to the TRS. People like Dattatreya, Kishan Reddy and Dr. Lakshman who won on BJP ticket earlier did not go for religious angle. They won because of their track record of service and their proximity to their electorate. Only Raja Singh used to digress. It will be unfortunate if the BJP misunderstood its victory as a result of the attacks against MIM and continue with that trend to win Assembly elections in 2023.  It will destroy the Ganga-Jamuni tehzeeb Hyderabad has been known for.

An interesting pattern in voting

But the Reddy community which is present in large numbers in upwards of Malakpet till Vanasthalipuram and Amberpet had voted for the BJP. This is a danger signal for both the TRS and the Congress. TRS has been doing everything to keep that community in good humour. The existence of the Congress is dependent on the community. The divisions under Medak Lok Sabha seats where Harish Rao campaigned had voted for TRS with the sole exception of Moosapet.