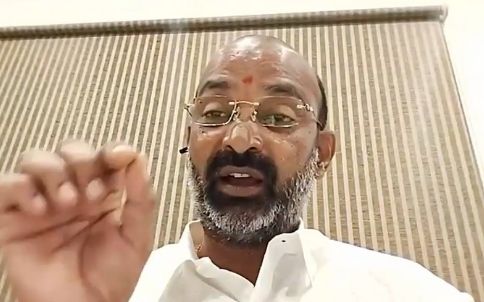 Hyderabad: Circular which was released by EC at late night on Thursday created ripples in political circles. As per the circular issued by EC, ballot paper voted with ‘INK’ is also valid. Generally as per rules, if the vote is not marked by Swasthik symbol, provided at booth, it is considered invalid. This new circular raises eye browse in parties which are hopeful of doing better in GHMC elections.

TBJP President Bandi Sanjay held a press meet late in the night. He questioned EC for releasing circular at midnight in unconstitutional manner. He felt this circular will favor ruling party and alleged that the  EC has colluded with TRS during GHMC elections. Some gambling is going on, EC should cancel the circular, and party will file house motion in court, Bandi further added.

“How can voting percentage increase dramatically in last one hour? We have doubts on that and adding to that release of circular by EC who did not reveal the percentage of voting from 5 to 6 pm on the polling day, ”said Sanjay.  He declared the percentage on late night around 1 am, this is all rigging favoring TRS, said Bandi Sanjay.DGP, CS, GHMC Commissioner, officers have joined hands  to help TRS win, he further added.

For the first time peculiar scene was witnessed at Pragathi Bhavan or by TRS leaders. They were mum from poll day without any press meet or hungama. Even after the polling was completed, BJP Nampally head office was celebrating with fireworks and cadre appeared to be in josh, which was not seen at TRS party office. Exit polls favored TRS party all the way, but no response from TRS, same with the case of MLC Kavitha’s dual vote comment. These factors created more doubts in opposition parties about the last hour drama. The exit poll results are now coming out that it favored ruling party.

With the counting already in progress, we have to wait for the court order for the permission of counting INK votes or not. Meanwhile in few centers there were complaints that ID cards and Entry pass were not issued for  counting agents and postal Ballots will be counted before 8 am, which is also a creating controversy during GHMC counting.