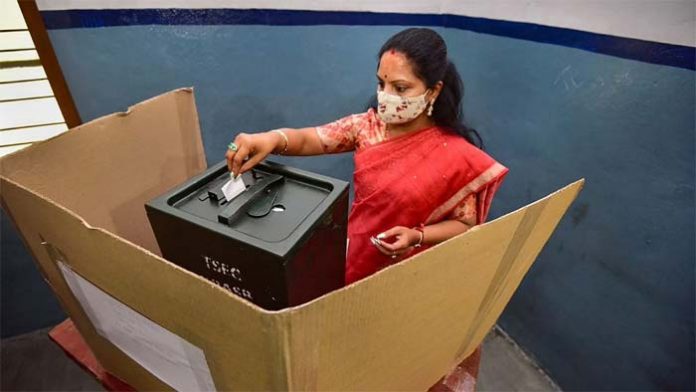 Hyderabad: The fiery battle is still continuing between TRS and opposition parties, the Congress and the BJP, even after polling was over. This time the opposition pointed out about MLC Kavitha casting her vote in Hyderabad during GHMC Elections.

TPCC spokesperson Indira Sobhan alleged that Kavitha has voter ID at Navipeta mandal, Bodhan assembly constituency which is in Nizamabad district. There is no problem in casting vote, but when she had enrolled her vote at Pothungal, how can she use it in Hyderabad for GHMC elections? Indira questioned  Kavitha with documentary  evidence. If CM’s daughter indulged in dual vote, where is democracy going? It is against the Constitution and I request SEC to disqualify her from MLC position, Indira said.

BJP leaders also met EC on Wednesday and lodged complaint against  Kavitha. Gujjala Premanada Reddy, BJP’s leader, wrote a letter to EC demanding to take action against  Kavitha and disqualify her from MLC.

After receiving complaints from opposition parties and news spread in social media, EC came out with a statement that Kavitha cancelled her vote at Pothungal. But EC was mum when questioned about the reflection of Kavitha’s name in the latest website of Election Commission which shows she is still a voter of Nizamabad district.