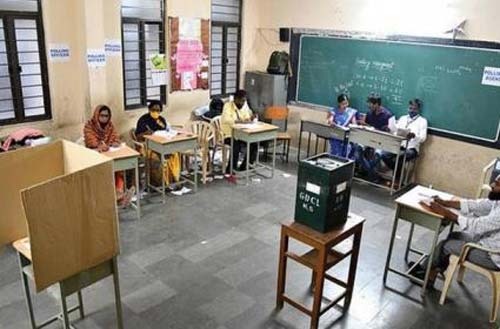 Did they dislike ‘hate speech’?

Voters apathy became a point of discussion and criticism today after it is reported that a little above 45 per cent reached polling booths to elect their Municipal Corporaters. Most controversial aspect is that there is a sudden addition of ten percent to the figures of 35 per cent as reported in media overnight. Opposition leaders jumped to conclude about rigging. Variation is always possible in ascertaining the per centage of votes polled, in any election.

Even if 45 plus pc is accepted as an average polling for any election, it is difficult to agree with phenomenon of not exercising franchise in a democratic country. India, being the largest democracy in the world, does not give proper message across the globe.

Political parties should blame themselves

It is strange that political parties are blaming State Election Commission for low polling. The job of SEC is to facilitate peaceful polling. Instead of blaming the SEC, the parties must blame themselves. Any low turn out is a shameful failure of political leaders whether ruling or others. It means that they could not move the voter, did not provoke thinking among them about the importance of voting them. Political campaigners succeeded only up to 45 per cent and recorded 55 per cent failure. I know 100 pc is not possible, and that if polling crosses 90 per cent we suspect rigging. This time none can allege manipulation of EVMs as it was paper ballot polling that passed off smoothly, except ordering repoll in a few booths.

This time I have noticed that contesting candidates have given to each voter, a personalised letter (with name of voter printed), plus voter number slip, with poll assurances. I suggest, the candidates to add their email id, dedicated phone number with promise to respond to mails. Each candidate should give such an assurance letter, of course, depending on affordability. They should also enter into debate over TV channels. Each electronic media, both TV and Radio should live telecast the candidates debates of each constituency.

Display the affidavits of candidates

As a voter in Hyderabad, I saw TRS vibrant presence around my colony and next BJP has made a serious impact of its visibility. There are six candidates in contest, but I do not know about four persons. If a contestant cannot reach the voters in a small constituency, what can they do as corporators. A voter is not wrong if he asks “when a candidate does not feel importance of meeting us before election why should I bother about voting”. No voting without candidate meeting, should be the norm voters should insist on in any campaign, importantly for local body elections. I wish voter will gain strength and vibrancy to demand candidate’s presence for at least campaign. Why not candidate addresses the residents of a colony, or apartment, or at the street corner? What do they do in fact? What kind of campaign they did? Bringing Ministers and Party Presidents for mammoth meetings must be secondary and meeting voters should be primary aspect of the campaign.

It is surprising to know that a national political party leader finds it essential to campaign for a local body poll, travel all the way from Delhi. A central minister spent all his time here enthusing the workers and energising the party. Executive President of party, Chief Ministers of different states used their charisma. The Chief Minister addressed a mammoth public meeting with effective speech. His son and daughter made hectic tours and appealed to voters through rallies and meetings. Union Home Minister arrived in and straight went to Charminar, to worship Bhagya Lakshmi mandir attached to one of four pillars. The state leaders were working overtime with killer instinct. We must see how many people turned to polling booth and how many of them voted respective parties. Most of the time campaigners spoke in low standard of civilisation, in unspeakable language, without any hesitation or public shame. The communal agenda was dominating in campaign by a couple of parties, which touched low ebb as if they do not have anything else to say other than communal hate. People might have feared the riots because of high decibels of hate campaign and did not like to respond.

To compel voters or not?

What to do? Should we make voting compulsory and punish who do not vote? Not a good idea to make voters liable to be punish for not coming to vote. There is a new provision of NOTA, none of the above, a choice in addition to number of contestants. A voter can come to booth but need not vote any of them. That is considered as a right of freedom of speech and expression by Supreme Court and freedom lovers. Fine. If that is the matter of freedom, not coming to booth is equal to NOTA and hence not turning in for voting is not a breach of duty but exercise of choice.

The right to vote is part of Article 19(1)(a) of our Constitution which is institutionalised by Article 324 through Election Commission and Representation of People Act. A leader wanted withdrawal of social welfare benefits from Government. This is most unreasonable demand of these leaders. If the leaders want to punish voters, why not they be punished for breach of electoral promises, etc?

In this context I would like to add my friend Pendyala Mangala Devi’s commentary based on Law on the question whether voter should be compelled to vote?

To Vote is Right not a Duty

The right to vote in India is provided by the Constitution and the Representation of People’s Act, 1951, subject to certain disqualifications.  Article 324 of the Constitution guarantees the right to vote to every citizen above the age of 18.  Further, Section 62 of the Representation of Peoples Act (RoPA), 1951, states that every person who is in the electoral roll of that constituency will be entitled to vote.  Thus, the Constitution and the RoPA make it clear that every individual above the age of 18, whose name is in the electoral rolls, and does not attract any of the disqualifications under the Act, may cast his vote.

In1951, during the discussion on the People’s Representation Bill in Parliament, the idea of including compulsory voting was mooted by a Member.  However, it was rejected by Dr. B.R. Ambedkar on account of practical difficulties.  Over the decades, of the various committees that have discussed electoral reforms, the Dinesh Goswami Committee (1990) briefly examined the issue of compulsory voting.  One of the members of the committee had suggested that the only effective remedy for low voter turn outs was introducing the system of compulsory voting.  This idea was rejected on the grounds that there were practical difficulties involved in its implementation.

In July 2004, the Compulsory Voting Bill, 2004, was introduced as a Private Member Bill by Mr. Bachi Singh Rawat, a Member of Parliament in the Lok Sabha.  The Bill proposed to make it compulsory for every eligible voter to vote and provided for exemption only in certain cases, like that of illness etc.  Arguments mooted against the Bill included that of remoteness of polling booths, difficulties faced by certain classes of people like daily wage labourers, nomadic groups, disabled, pregnant women etc. in casting their vote.  The Bill did not receive the support of the House and was not passed.

It must be voluntary

Another Private Member Bill related to Compulsory Voting was introduced by Mr. JP Agarwal, Member of Parliament, in 2009.  Besides making voting mandatory, this Bill also cast the duty upon the state to ensure large number of polling booths at convenient places, and special arrangements for senior citizens, persons with physical disability and pregnant women.  The then Law Minister, Mr. Moily argued that if compulsory voting was introduced, Parliament would reflect, more accurately, the will of the electorate.  However, he also stated that active participation in a democratic set up must be voluntary, and not coerced.

Making Voting Compulsory and attaching it to obtaining Govt benefits is against the foundations of Democracy and Constitution. I agree with Pendyala to make voting very easy and convenient with the help of technology.  It is also suggested to offer some incentives to bring voters to booths.

To sustain democracy a voter should become vibrant enough and should not be swayed away by hate speeches, fake news and false propaganda of parties.