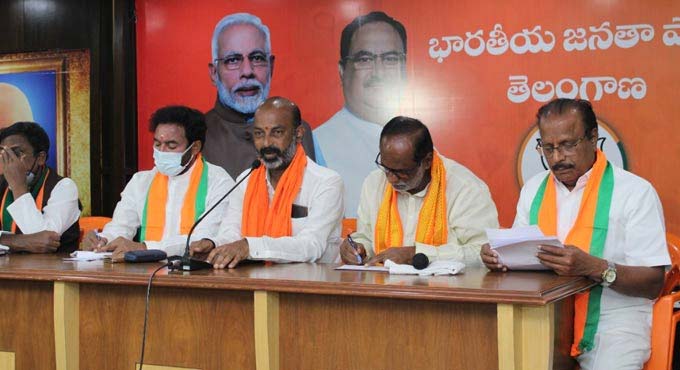 Hyderabad: Many political analysts and pollsters  are surprised to watch BJP national leaders coming to canvass  for local GHMC election. But there is a deliberate strategy which is executed and monitored  by Delhi heads of the BJP. It is difficult to understand  the real motives  behind the moves made by Modi and his right hand Amit Shah.

If  we look back at Gujarat panchayat elections, we may get a little idea of their mindset. In 1987, Congress was dominating the politics in Gujarat when Ahmadabad witnessed municipal corporation elections. PM Modi was then  a general secretary of the BJP in-charge of the corporation elections. He took the election seriously and big leaders like Vajpayee and Advani were persuaded to campaign for those elections.

Modi did it in Gujarat first

Modi was the first leader  to observe the  popular  anger against the Congress that was under current in the voters at ground level. His master plan worked and BJP won a landslide in those elections and went on to win Gujarat Assembly elections, a few years later.

It was followed in UP

There is, therefore, nothing new  in BJP taking  GHMC elections seriously. As soon  as the party bagged Dubbak Assembly seat in the bypoll, the party leaders  understood  that anti-incumbency sentiment against the  ruling party, TRS, is increasing and moved to win  one more southourn State with their action plan. For this, they started inviting  leaders from parties like TRS, Congress irrespective of their positions in that party. This is all to bowl TRS in  mind game and to strengthen BJP at root level.

It is clear that opposition parties are in a hurry to understand the strategy which can’t be visualized until the last move .On one , the BJP is trying to unite the Hindu votes in the name of ‘Hinduthva’ and on the other side it is inviting the opposition leaders into their party. It is almost one shot- two birds, the GHMC elections and getting ready  for the future war in the Assembly elections.

Last but not the least, there is a lot of meaning whenever Ram Madhav tweets before elections or counting. On the counting day  of Dubbaka by Poll, soon after the  counting started he came up with a tweet that some change is going to happen which could be seen in the  result . Now once again he came up with a tweet which reads, “GHMC elections have turned into a direct fight between BJP and MIM, TRS is receding as election date is nearing, Best wishes to BJP candidates.” Don’t take this lightly  as many calculations are there after GHMC poll. Until then, watch the speeches and promises of leaders during the  few  days that are left for the campaign without getting emotional.