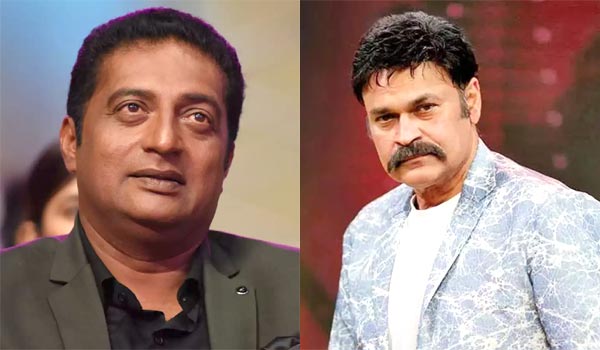 Hyderabad: The war of words between political parties has given way to the film personalities. Now it is the turn of  Tollywood actors-turned-politicians, Prakash Raj and Nagababu, with former supporting TRS and latter BJP. This took  a serious turn  when Prakash Raj compared Jana Sena Chief Pawan kalyan to ‘Oosaravalli” (chameleon) in an interview to an electronic media.

Pawan is an ‘Oosaravalli’: Prakash Raj

Actor Prakash Raj came out with a strong criticism of Jana Sena chief for not contesting in the GHMC elections. He also felt that supporting BJP is a dangerous play in democracy. Prakash Raj who came to Hyderabad for a film shoot had a chat with a representative of a TV channel , who said he was surprised to see Pawan supporting a party whom he opposed in 2019 AP Assembly elections. The decision was not liked by even Jana Sena cadre. “In 2014, you supported BJP and in 2019 you turned against it, now you are again supporting it.  What is your stand? You are behaving like ’Oosaravalli’ (chameleon),”  Prakash Raj commented. “What is the vote share of BJP in AP and what is your party’s vote share? You have your  own registered party, then why are you standing on BJP’s shoulders?” Prakash questioned. He gave a call to voters to cast vote for TRS in upcoming GHMC elections.

Nagababu, older brother of Pawan Kalyan, came up with a reverse counter on the character actor. He came up with a tweet which reads,” Decision in politics will be changing constantly depending upon the circumstances and ground level situation. Supporting BJP has meaning for development in coming years. Prakash Raj, who ran away from a debate with Subramanian Swamy, has no right to comment on Pawan, no one can stop BJP and Jana Sena alliance from  coming to power which is a must for AP development. We all know how you harassed producers for money and with dates. First you change into a kind man, and then talk about Pawan, BJP, Jana Sena alliance will win in GHMC elections.”

Prakash Raj came up with such controversial remarks during Karnataka Assembly elections also where BJP came to power. When questioned about this, he said it is his duty to bring awareness in the people about dangerous political play by communal parties, and he is least bothered about election outcome.