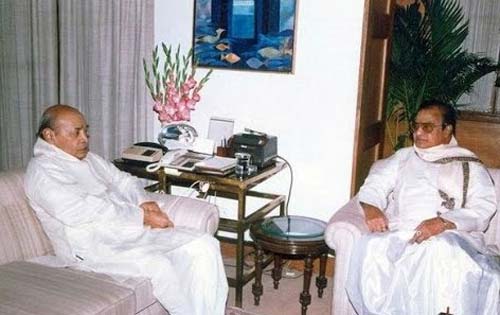 Two sons of Telugu soil were dragged into the election discourse during the campaign for Greater Hyderabad Municipal Corporation (GHMC) elections. In a strange coincidence, both the leaders were stalwarts who were done in by their own parties and people whom they trusted. Both died after suffering humiliation at the hands of the leaders who were promoted by them. PV Narasimha Rao and NT Rama Rao were the leaders whose memorials were sought to be removed from the necklace road on the bank of Hussain Sagar. The illustrious Telugu leaders who made Telugu race proud are being disrespected by the  Hyderabadis once again. The memorials of both the leaders lay just some yards apart.

Man who did wonders

Pamulaparti Venkata Narasimha Rao (PV) was an MLA from Karimnagar district, he was minister for several years. He became chief minister after Kasu Brahmananda Reddy was asked to step down owing to the pressures due to Telangana agitation in 1969-70. He implemented land reforms very sincerely. As a minister of jails, he introduced ‘open jail’ system and as education minister he was responsible for the concept of residential schools.  As a foreign minister he visited more than a hundred countries and improved India’s relations with other countries in the world. As a prime minister he introduced path-breaking economic reforms that made India an economic power. Known as Deng of India, he certainly deserved to be honoured with the highest civilian award – Bharat Ratna.

The  Demigod who was humiliated

N.T. Rama Rao, a super hero of silver screen and a demigod who made a mark in the roles of Rama and Krishna, a household name who created history in Indian politics by throwing the entrenched Congress party out of power in Andhra Pradesh. He became a chief minister within nine months of launching Telugu Desam Party. He did wonders while in power. He may have made mistake out of inexperience in politics and administration, but his sincerity was not questioned even by his rivals. He married for the second time in extraordinary circumstances. His children and their spouses never excused him for that adventure.  They ganged up against him in the name of fighting his wife and mercilessly dethroned him from the position he earned by straining himself with relentless campaign with his wife Lakshmi Parvathi on his side. He won a landslide and started his third innings as chief minister.  Within less than a year after taking the reins, he was dethroned. Though the way he lost his position and power was another matter, he deserved to be awarded Bharat Ratna for the services he did a politician who not only ruled an important State but also one who mobilised the Opposition parties by bringing them on one platform. He was the creator of the National Front which came into power after Rajiv Gandhi lost his elections in 1989. When MGR and Kamaraj were honoured with Bharat Ratna, why not NTR. MGR and NTR were equals as actors. But in political arena while MGR split an existing DMK which already defeated Congress many years ago and established AIADMK, NTR launched his own Telugu Desam Party and thrown out the Congress within nine months. He surely stands taller than MGR as a politician.  NTR certainly deserved the highest honour.

Both were mentioned for wrong reasons

Both PV and NTR were mentioned in the election discourse for wrong reasons. AIMIM president Asaduddin Owaisi said their (PV’s and NTR’s)  graves should be dug out and the memorials in their name should be removed from Tank Bund area. In fact they were not buried. Their bodies were burnt on the pyre as part of cremation. The statement was part of the running battle that was going on between the BJP and the MIM. When TBJP chief Bandi Sanjay said there are Rohingyas and Pakistanis in the old city of Hyderabad and the BJP Mayor would order surgical strikes on the old city, Asad  asked the BJP leaders to conduct surgical strikes on China if they have guts. When the MIM leaders spoke about removing the samadhis of PV and NTR, the BJP leaders said they would take just two hours to demolish Darussalam (an Arabic word which means abode of peace), a place of worship for Muslims. The slanging match has gone on at very low level.

Congress leaders Uttam Kumar Reddy and Revanth Reddy  flayed the MIM and the BJP leaders for indulging in atrocious language while attacking each other.  TDP chief Chandrababu Naidu deplored the way  MIM leaders were taking in derogatory language  about great leaders .  Kavita, newly elected MLC and former MP, appealed to the Central government to bestow Bharat Ratna on P.V.

Notwithstanding the cacophony during the election, which is only expected, both PV and NTR were done in by their own people before they came to be publicly insulted by MIM leader. PV who served the Congress party for more than six decades and worked in almost all positions that are there in the party and government, was humiliated by his own party at the end of his life.  The fact that Babri masjid was felled by Karsevaks in the presence of BJP leaders  L.K. Advani, Uma Bharati and others, the Congress leadership chose to single out PV for the demolition of the masjid, although he had to take the blame as prime minister who could not stop the atrocious act.  He was not given ticket to fight elections in 1998 although he was healthy and willing to contest.

Then the court cases had to be fought by PV himself without any help from the party though it was for the sake of the party and its government that  he did what he had to do. The ultimate humiliation for him was handed over after his demise. His deadbody  was not allowed  to enter the AICC headquarters in 24, Akbar Road in Delhi, thanks to Sonia Gandhi and her close aide Ahmed Patel , who succumbed to Covid-19 recently. PV’s  name was not uttered, no memorial meetings were held for eight years after his death by any Congressman out of sheer fear of antagonising the lady.  Even the TRS or its government did not do anything to remember him for almost fifteen years after his death. It was only this year, which happens to be PV’s birth centenary,  Telangana Chief Minister K. Chandrasekhar Rao (KCR) had launched the centenary celebrations in a big way. Better late than never! The other Telugu State, Andhra Pradesh, did not think of doing anything in the centenary year. Not so far at least. The rulers appear to have forgotten that PV was chief minister of undivided Andhra Pradesh and a proud Telugu.

Humiliation at the hands of his children

In case of NTR, it was his own children and sons-in-law and daughters-in-law, more than a dozen of them, who humiliated him in his last phase of life. After winning historic elections with extraordinary majority, he did not complete even one year in office. Before the elections, he married a college lecturer and a biographer, Lakshmi Parvati. It was not liked by NTR’s children. The same thing was taken advantage of by his sons-in-law, chiefly the third son-in-law, Nara Chandrababu Naidu. NTR’s children were focused on fighting Lakshmi Parvathi whom they despise. But Naidu’s focus was on the throne. Ultimately, Lakshmi Parvathi was portrayed as a villain and the Viceroy hotel was made the theatre of war. NTR, who did not think in his wildest dreams that his own children would wage a war against him to the finish and snatch away power was in a state of shock and inaction. NTR who called himself a lion was tamed, defeated and humiliated by his own people.

Two Telugu heroes who were humiliated by their own parties and trusted people are made a subject of ridicule  and abuse in the campaign in the  ensuing Greater Hyderabad Municipal Corporation (GHMC) elections. There is no wonder that MIM chief has called for removal of their memorials from Necklace Road. Whatever the present generation of political leaders say or think about them, PV and NTR would be respected by historians who are unbiased and objective. Whether they are awarded Bharat Ratna or not is immaterial. It makes no difference to their place in history.