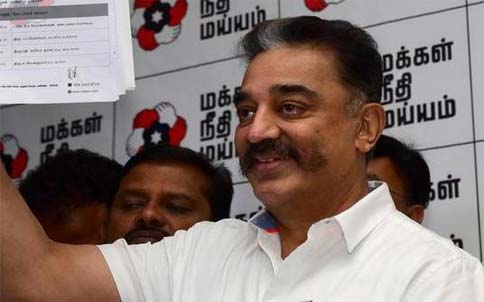 Chennai: MNM party President, actor-turned-politician Kamal Hasan had a series of meetings with the district party secretaries at a hotel in Chennai on Monday. He clearly came out with a stand that there will be no coalition with any Dravidian party during 2021 assembly elections.

Makkal Needhi Maiyam(MNM) party had already started arrangements for assembly elections with Kamal Haasan planning for three phases of meetings and discussions to take place periodically to avoid crowd in the hall. The first phase meeting was held on Monday with participation of nearly 100 constituencies and 17 district president’s in attendance. Second phase of meeting will be held on Tuesday and third phase on Wednesday.

Party members who were present at the meeting hailed Kamal Haasan as future CM as soon as he entered the hall. They requested Kamala Haasan to contest from Paramakudi, which is home town of the actor-turned-politician. However, there was no nod from the party President to the proposal. Party vice-resident Mahendran, general secretary A. G.Mourya and youth wing secretary Snehan were seen at the meeting in the first phase.

Party president is keen on going alone without any coalition in 2021 assembly polls. He felt that rather than joining hands with Dravidians parties , it is better for him to go independently, but he clarified that all decisions regarding candidates and alliances will be taken at an appropriate time. Kamal Haasan’s decision to go it alone came after messages on social media  which said that Tamil Nadu is looking for a change rather than continuation of Dravid politics

Party workers opined that the decision of Rajinikanth backing out from  politics may help MNM and increase chances of winning more seats than expected. They also felt that Rajinikanth may help his film friend by giving support and the party is serious on capitalizing on Rajini factor.

The meeting was held following Covid regulations with mask and sanitization of the hall before Kamal’s entry.