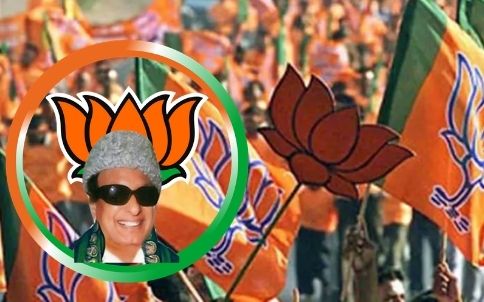 Chennai: Convinced of the political vacuum in Tamil Nadu, BJP has planned a yatra named ‘Vetrivel Yatra’ with an aim to strengthen itself in the South by triggering Hindu sentiments. Yatra will cover six lord Murugan temples in state in a span of one month, in time for the upcoming 2021 assembly elections.

In the lotus flag, there will be image of TN’s tall leader late MGR’s during the yatra, which was opposed by ruling AIADMK. But BJP came down by saying MGR is not irreligious by reminding of his visit to Kollur Mookambika Temple. A small teaser was released by BJP leaders for the yatra which shows MGR transformation into PM Narendra Modi saying both are pro-poor.

But Dravidian ideology supporter’s version is different. They say MGR refused to call himself a ‘Hindu” during 1981 census, at that time MGR was chief minister  and second point to note  is that  MGR used to celebrate only festival ’Pongal’ as a mark of secular spirit  which is celebrated in the name of ‘Periyar’. Even in assembly, in 1982, MGR came up against RSS with a speech that he will not allow the people being divided on religious basis and his visit to Mookambika temple is, he sees his mother in the deity, as per Dravidian supporters.

TN BJP president will launch one month yatra on November 6 from Tiruttani and will end on Dec 6 as per the directions of party president J.P. Nadda. BJP which used to denounce Periyar and his ideology has been sidelined after the entry of film heroine-turned-politician Kushboo into party. Kushboo strongly claims that she is still periyarist and party thinks her role will be crucial in coming days in the form of protests and in party events.

Opposition parties strongly opposed BJP’s one month yatra schedule. They fear this may lead to communal violence across the State. The yatra which will touch almost all Hindu region belts may end with religious differences and riots, felt communist parties.

Can BJP fetch AIADMK vote bank until MGR’s face with two leaves symbol is retained by ruling party? Will they accept Modi as defender of weaker section compared to MGR? Even late Jayalalitha came down strongly on BJP during 2014 elections when BJP said ‘Lady or Modi’ and voters moved towards her pushing BJP slogan aside. These are the factors to be noted by BJP before launching its yatra.