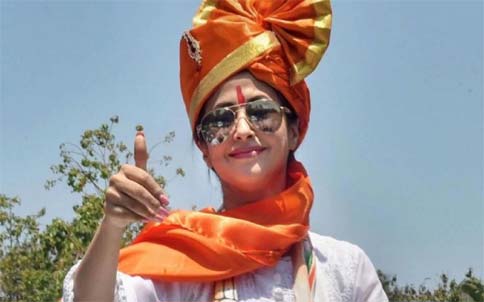 Hyderabad: Out of 12 candidates to be nominated as MLCs  from Governor quota in Maharashtra, Maha Vikas Agadhi Government included Urmila’s name in the list. As per the congress sources, she is not keen to be nominated from National party after she quit it.

Urmila contested in the Lok Sabha elections from North Mumbai constituency  in 2019 and was defeated by BJP’s candidate Gopal shetty. She was a leading light in the election campaign for congress party in Mumbai. Urmila’s good speeches, Marathi face, and filmy background could not save the congress party which lost 6 seats. But her role in the campaign was well recognized. But due to internal politics, this actor-turned-politician left the party and remained silent from September  2019.

Shiva Sena was looking for a face which is anti-BJP and picked her for the Lagislative Council as per party sources. Earlier  names like, Raju Shetti and newly inducted NCP member Eknath Khadse were taken into consideration but Shiva Sena felt Urmila is a better choice.

In June 2020, 12 MLC seats have fallen vacant in Maharashtra. The final list was sent to Governor and the process is expected to complete by Monday. The Maha Vikas Agadhi  alliance in Maharashtra comprises  the Shiv Sena, the Congress  and the Nationalist Congress Party (NCP). Fpur names from each party were sent to Governor Bhagath Singh Koshyari .