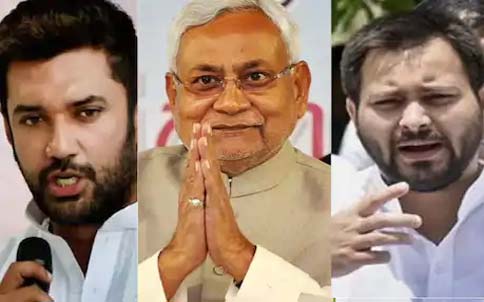 Bihar appears to be preparing to throw up a surprise by making a 30 year-old young man the next chief minister. Chief Minister Nitish Kumar with all his guile and experience has been giving an impression of a man on the way out. Both Prime Minister Narendra Modi and Nitish Kumar have said enough about the care they had taken to protect the migrant workers during the epidemic when the virus was at its peak. But they did not sound convincing.

People are angry with rulers

The voting percentage in the first phase of polling on Wednesday was as high as it was in 2015.  The voters appeared to be voting with their feet in spite of the Covid-19 pandemic. The trend shows that the people are expressing their anger at and disapproval of the dispensation headed by Nitish Kumar. The chief minister who was called ‘Sushashan Babu’ is no more treated with the reverence he was used to. He had lost his lustre and sheen.

Local issues come to the fore

It is a fact beyond doubt  that Narendra Modi is the most popular politician in Bihar today followed by Tejaswi Yadav.  If it were the Lok Sabha elections, the BJP-RJD combined would have swept the polls as it did in 2019. But in elections to the Assembly, the national issues and personalities would hardly matter. The people are concerned with their own day-to-day problems concerning their livelihood. Nitish Kumar had realised that Modi is more popular than himself and that he has to depend on PM’s popularity to overcome the challenge and win the elections. He has been playing second fiddle since the time the seats-share was decided upon between the JDU and the BJP.

Thanks to the dangerous games being played by the BJP leaders in the State and at the Centre, there is mutual distrust among the BJP and JDU leaders and cadres. While emphasising the alliance in Bihar with JDU, the BJP has been continuing to have alliance with the Lok Janashakti Party (LJP), founded by late Ram Vilas Paswan, now headed by his son Chirag Paswan.  Narendra Modi, who shared the dais with Nitish Kumar and praised the chief minister to the sky while claiming that the Centre and the the State had done a wonderful job during the Pandemic, did not utter a word against young Chirag for carrying on his tirade against Nitish Kumar.  Chirag, on his part , would  not end his speech without praising the prime minister and criticising the chief minister.

The whole exercise has been causing a lot of misgivings among the leaders of the alliance. If BJP leaders consider themselves clever by pitting one ally against the other so that they can fish in  troubled waters, the voters in Bihar are intelligent enough to see through the games. The people of Bihar may lag behind in education and other areas of social development, but they have been leading the political discourse in the country right from 1974 when Lok Nayak Jayaprakash Narayan led the opposition forces against Indira Gandhi forcing her to impose Emergency.

Nitish Kumar played his cards cleverly in 2015 when he crossed over to the RJD and Congress alliance to won a resounding win thus escaping double anti-incumbency sentiment. When he left the Grand Alliance to team up with the BJP, his image got dented. With Covid-19 causing unexpected problems such as the migrant workers being forced out of their jobs and their decision to walk back home resulted in a major setback to the ruling alliance. Whatever the prime minister may claim, the migrant workers and their relatives and friends know it was Narendra Modi who clamped the lockdown giving just four hours notice. They were also aware that Nitish Kumar did precious little to ameliorate their sufferings.

The other tricky problem staring at the government is unemployment. The scale of unemployment is unprecedented. RJD leader Tejaswi was clever enough to focus on this core issue by promising to create 10 lack jobs. Nitish Kumar tried to mock at the young politician saying a person who is not eligible for a job (Tejaswi did not pass even matriculation. He passed 9th class) is promising ten lakh jobs. The chief minister, in his election speeches, tried to argue that it is not possible to create ten lakh jobs. Tejaswi countered by saying that 40 percent of the annual budget that has not been spent by Bihar government for years would suffice to create the number of jobs he promised.  The large and aggressive presence of unemployed youth in the election meetings addressed by Tejaswi indicates that they were placing their trust in the young leader rather than the old and tested chief minister. How can Nitish Kumar talk about Tejaswi’s educational qualification after working with him as  deputy chief minister  in his government during 2015-17? Though Tejaswi appeared weak at the beginning of the campaign, he seems to have picked up the threads and improving by the day. He seems to  have  convinced the sceptics and fence-sitters that he is no pushover. The young Yadav, who is endowed with abundant native intelligence, is mature enough to realise that his father’s (and that of Nitish Kumar’s) slogan of social justice alone would not be enough to convince the youth but their real concerns have to be addressed. That was the reason why he came up with the idea of  ten lack jobs which he would not be able to create but would surely arouse aspirations in the unemployed youth.

Modi had nothing to offer

Narendra Modi did not have anything new to offer. The fact that he raised the religious bogey once again talking about Ram mandir shows that he is not on a strong wicket. People in Bihar are aware that the NDA government at the centre has mishandled the Covid-19, the economy and the security issues.

Except the usual bravado, there was no substance in the election rhetoric of the prime minister. In normal circumstances, the RJD-Congress-Left parties alliance (Grand Alliance) may not be able to beat the social alliance that has been built up by the NDA in Bihar, but they are sure to give a real good fight and one should not be shocked if they beat the ruling alliance given the abnormal situation in the country. The credit for bringing things to this pass should go to the younger son of Lalu Prasad Yadav,  who has been languishing in jail after conviction on corruption charges. If the second and third phases of polling also witness the same restless youth thronging the polling booths with the defiant body language, Tejaswi is most likely to be the next chief minister of Bihar.