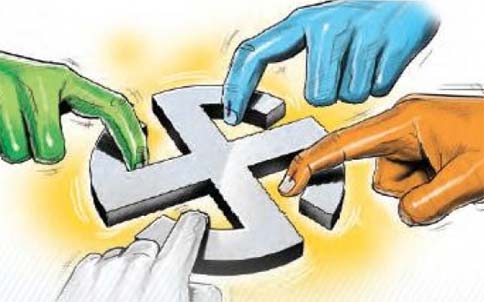 Dubbaka: As the election date is fast approaching  for Dubbaka by-poll,  the situation is gaining momentum with exchange of heated  words and tensions growing  between TRS and BJP. After the police seized cash at the house of BJP candidate Raghunanda Rao’s nephew, it felt the TRS is playing unfair politics by unleashing the police. After the incident, the BJP lodged a complaint with the EC against TRS asking for action and submitted a memorandum against Siddipet CP for manhandling their MP and party’s State president  Bandi Sanjay.

To pacify the situation, the EC of India has  appointed new political observer, Saroj Thakur, an IPS officer of Tamil Nadu cadre. The ECI has  released a press note which says that in exercise of power conferred on it by Article 324 of the Constitution and section 20B of the Representation Of People’s Act, 1961, it has appointed Saroj Kumar Thakur as police observer for the Dubbaka by-poll which will be held on Nov 3.

Both TRS and BJP took the by election seriously with both trying for upper hand. BJP wants to prove that it is an alternative to TRS in the state with a win in this by poll. This election became a tug of war between TS Finance Minister Harish Rao and opposition parties the BJP and the Congress. Both the opposition parties are bent upon  defaming  Harish by winning here which appears  to be tough.