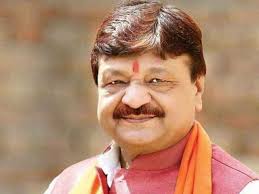 BJP's national general secretary Kailash Vijayvargiya, commented on the current political situation in Madhya Pradesh on Sunday saying that a "new mission" will be launched after the cabinet formation in Karnataka, where the Congress-JD(S) alliance recently lost the confidence motion.

"After the formation of the cabinet in Karnataka, a new mission will be started. It is not our wish to make a government fall but Congress MLAs have uncertainty in themselves,” he told the reporters when questioned about the Congress-ruled Madhya Pradesh.

He added that the Congress MLAs had no confidence in their leadership and were marred by division and that thus, they felt that the leadership of Prime Minister Narendra Modi was very good.

The BJP leader then further said commented on Congress and its governments by saying that were falling "due to their own works".

During his visit to the BJP office, he held a meeting with party leaders and workers and also listened to PM's Mann ki Baat.