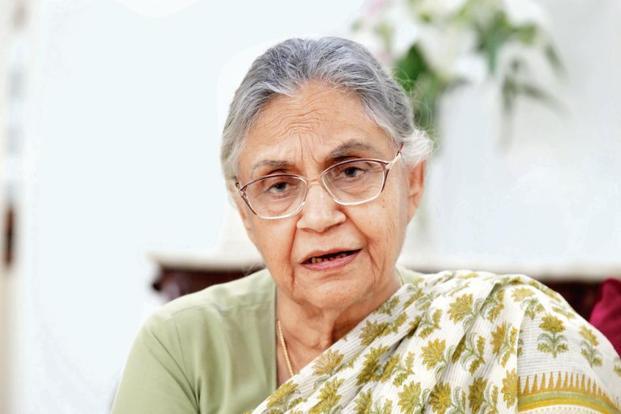 Dr Ashok Seth, director, Escorts Fortis said Sheila Dikshit was managed well by a team of doctors. "At 3:15 pm she again suffered a cardiac arrest. She was put on a ventilator and at 3:55 pm she passed away peacefully."
The news has brought in condolences from all over the Nation. Delhi Cheif Minister and Aam Aadmi Party (AAP) leader, Arvind Kejriwal said:
Just now got to know about the extremely terrible news about the passing away of Mrs Sheila Dikshit ji. It is a huge loss for Delhi and her contribution will always be remembered. My heartfelt condolences to her family members. May her soul rest in peace.
Congress Party tweeted saying:
We regret to hear of the passing of Smt Sheila Dikshit. Lifelong congresswoman and as three-time CM of Delhi she transformed the face of Delhi. Our condolences to her family and friends. Hope they find strength in this time of grief.
Prime Minister Narendra Modi said:
'She made a noteworthy contribution to Delhi’s development'
Deeply saddened by the demise of Sheila Dikshit Ji. Blessed with a warm and affable personality, she made a noteworthy contribution to Delhi’s development. Condolences to her family and supporters. Om Shanti.
Former Prime Minister Manmohan Singh said:
I am shocked to hear the sudden passing away of Smt. Sheila Dixit. In her death, the country has lost a dedicated Congress Leader of the masses. People of Delhi will always remember her contribution to the development of Delhi during her tenure as Chief Minister for three years.
President Ram Nath Kovind said:
Sad to hear of the passing of Smt. Sheila Dikshit, former Chief Minister of Delhi and a senior political figure. Her term in office was a period of momentous transformation for the capital for which she will be remembered. Condolences to her family and associates.
Her body will be kept at her house in Nizamuddin, New Delhi so that her supporters and well-wishers can pay their tributes. The last rites will be performed at 2.30 pm tomorrow at Nigam Bodh Ghat.