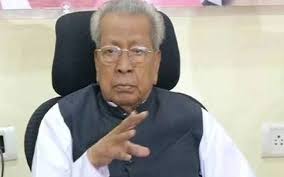 The Centre appointed Biswa Bhushan Harichandan, a senior BJP leader from Odisha as the new Governor of Andhra Pradesh. So far, ESL Narasimhan has been functioning as the Governor for both Telugu states, Telangana and Andhra Pradesh, since the bifurcation of erstwhile AP in 2014. This was stated through an official statement released by the Rashtrapati Bhawan on Tuesday evening.

Biswa Bhushan Harichandan (85), a senior BJP leader and Minister was a five-time MLA from Silica in Odisha. Born in 1934 Biswa Bhushan started his career as a lawyer and has also authored several books. The veteran leader joined the Bharatiya Jana Sangh in 1971 and worked in the party in various capacities until the formation of the Janata Party in 1977.

He was also detained during the Emergency in 1975. He began his association with the BJP and rose the ranks to serve as BJP’s Odisha State President between 1980 and 1988.