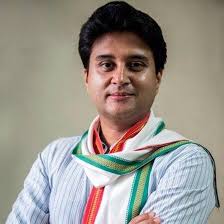 Congress leader Jyotiraditya Scindia on Thursday said that the party needs to "reinvent" itself while stressing on finding a new president "at the earliest".
Reacting on Rahul Gandhi's resignation, he said that Gandhi will himself decide his role in the 133-year-old party. "We had never imagined that Rahul Gandhi, who not only led the Congress but also the country's people, would leave his post."
"This is a serious time for the Congress", he told the reporters. The former Union minister said efforts to persuade Gandhi to continue leading the party had failed.
"Our effort was to convince Rahulji to continue. But, Rahulji remains firm on whatever decision he takes and I am proud of that.
"We have to search for a new party president. A lot of time has elapsed. Now, we cannot allow more time to pass," he said. Scindia himself lost the Lok Sabha election from his traditional seat Guna in Madhya Pradesh.
He added that the decision on a new Congress chief should be taken "at the earliest" and opportunity given to a leader who can infuse new energy into the party.
Related to his name figuring in the race for AICC president, Scindia said, "Deciding about the party president would be a collective decision. The Congress Working Committee would take a decision. We all have to take a decision together."
While responding to the question regarding the future role of Gandhi, Scindia said, "Rahulji will decide his own role. The Congress party wanted to see him as party president but his decision has also to be respected. On the way forward for the country's oldest political party, Scindia, who had resigned as AICC general secretary citing accountability, said the Congress now needs to reinvent and revive itself.
"A time comes when every organisation needs to reinvent and reinvigorate itself and this time has come for the Congress. We must win faith, love, and blessings of the people of the country."
Prior to talking to reporters in the Vidhan Sabha premises, Scindia watched the proceedings of the state assembly, which is having its monsoon session, for about an hour from the Speaker's gallery.