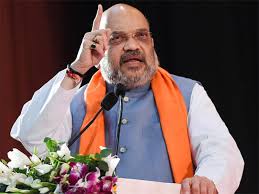 Amidst the backlash from the Opposition, Union home minister Amit Shah on Monday moved a statutory resolution to extend President’s rule in Jammu and Kashmir for another six months.

He reportedly also tabled the Jammu and Kashmir Reservation (amendment) Bill in the Upper House after it was passed by the Lok Sabha on Friday.
“In June last year, the PDP government lost support and governor’s rule was subsequently imposed in November. The Selection Commission has assessed the situation in the state and elections will be held by the end of the year due to ongoing religious festivals in Jammu and Kashmir," Shah told the House.
Even as the Congress hit out at the Centre, accusing it of dividing the state, Amit Shah asserted that the Reservation Bill was intended at including children living along the international border into the mainstream.
He added, “People who are living along the Line of Control and Line of Actual Control are included in the 3% reservation. But the people living along the IB face equal difficulties. Pakistan conducts shelling and firing and disrupts the peace and these children too should have equal opportunities."
The discussion will take place in Rajya Sabha regarding both the resolution and the Bill after which members will cast their vote.
Meanwhile, Prime Minister Narendra Modi had approved the extension of the President’s rule. He had done so on the grounds of the prevailing situation in the state as stated in the report of the governor of Jammu and Kashmir. The period of six months is with effect from 3rd July.
According to LiveMint, Shah said, “President’s rule was supported by Rajya Sabha on 3 January 2019 and that ends on 2 July 2019. That is why, I am here with this bill and proposal in front of the House that for six months, the President’s rule is extended because right now the legislative assembly does not exist."