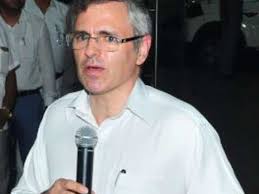 National Conference vice president Omar Abdullah on Friday called Union Home Minister Amit Shah's argument justifying the use of Article 356 of the Constitution to extend President's Rule in Jammu and Kashmir as "unacceptable".

Abdullah's remarks have come after Shah moved a statutory resolution in the Lok Sabha to extend President's Rule in the state for another six months with effect from July 3rd.
Later, while replying to a debate in the House over the resolution, he hit out at the Congress claiming that so far Article 356 (President's Rule) has been imposed 132 times of which the opposition party used it 93 times to dismiss state governments.
Retweeting ANI's tweet:
HM Amit Shah in Lok Sabha: They are saying we are trampling democracy in J&K. Before this time, till now 132 times, article 356 has been imposed(President's rule), out of which 93 times Congress has done it. Now, these ppl will teach us democracy?
Abdullah said:
"So the Home Minister's argument is that because the Congress has used Article 356 more times than anyone else the Modi government is justified in denying the people of J&K an elected government. That's an unacceptable argument."
Jammu and Kashmir do not have an elected dispensation since the PDP-BJP coalition government fell apart in June last year.
Earlier this month, the Election Commission had said that it will announce the schedule of assembly polls in the state after the Amarnath Yatra concludes. The pilgrimage, which will begin on July 1st, will conclude on August 15th.