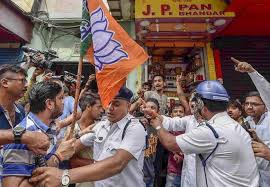 In another incident of violence between BJP and TMC supporters, one person was killed and four others injured in Bhatpara area of West Bengal’s North 24 Parganas district on Thursday.

The deceased has been identified as Rambabu Shaw, a pani puri seller and BJP supporter.

Reportedly, bombs were hurled and several rounds of bullets were fired in the air by the members of the two groups near a newly constructed police station. The Police Station was scheduled for inauguration on Thursday.

A team of police officers along with Rapid Action Force (RAF) personnel has been deployed in the area, with shops, market places and business establishments seen downing shutters in the light of the unrest.

Bhatpara has witnessed a series of clashes since May 19th, when bypoll was held in the assembly constituency.