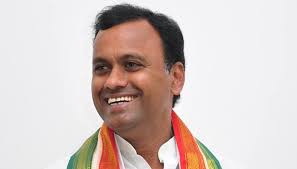 In another case of congressmen joining other parties, Telangana MLA Komatireddy Rajagopal Reddy is likely to join BJP, according to BJP state president K Lakshman.

Congress is already in a weak position after two-thirds of its MLAs have joined the ruling TRS.

Lakshman claimed that Home minister and BJP chief, Amit Shah, is likely to visit the state with hopes to strengthen the party in the state. It is expected that Reddy will join BJP in the presence of Shah.

Shah’s visit is seen as the entry of the party in the state politics and to strengthen its presence in the upcoming assembly elections. The party won four out of the 17 seats in the recent Lok Sabha elections.

Meanwhile, Reddy claimed that he would meet his followers to decide his future course of action. In other reports, he slammed the TPCC Chief N Uttam Kumar Reddy and state in-charge RC Khuntia for failing to win the polls. He added that the party is lacking strong leadership and facing hardship.

Hitting out at the ruling party, BJP state president, Lakshman said that CM K Chandrashekar Rao had purposely skipped the Niti Ayog meeting addressed by the Prime Minister as he could not face him in the crucial meeting.

According to NEW18, he also suggested that the CM should invite the PM for the Kaleshwaram launch on June 21st.

Meanwhile, Congress Legislature Party (CLP) leader Mallu Bhatti Vikramarka described Reddy's remarks hailing BJP as his personal opinion and said the party high command would take a decision in the backdrop of the MLA's critical comments about the party.