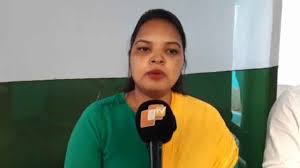 Chandrani Marmu, who has become a Lok Sabha MP at the age of just 25 years and 11 months, will now represent the parliamentary seat Keonjhar Lok Sabha in the house. Chandrani is the youngest woman MP of the Lok Sabha this time.

Marmu thanked the people of Keonjhar, chief of the Biju Janata Dal, to give them a chance. Her maternal grandfather Harihar Soren was twice MP from Congress till 1980-1989. However, Murmu's family is not active in politics.

Speaking to the media, Chandrani Murmu said her major focus was on generating employment in her region, and that she would not leave any stone unturned to accelerate setting up of new industries.

'It is unfortunate that the employment crisis is high in a mineral-rich district like Keonjhar. I would represent the youth and women of my state at the Centre,' she said.

In the Lok Sabha elections of 2019, Marmu defeated Anant Nayak of the Bharatiya Janata Party (BJP) twice with the difference of 67,822 votes. Odisha has a total of 21 parliamentary seats, out of which seven women MPs have been elected. This number is 33% of the total MPs in the state. Odisha is the first state with 33 per cent of women MPs in Parliament.