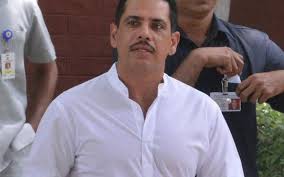 Robert Vadra, husband of Congress leader Priyanka Gandhi Vadra, on Friday extended his best wishes to Congress for putting in "plenty of hard work" into the Lok Sabha elections and Congratulated BJP for its win.

"Winning & losing is a part of life. My best wishes to Congress leaders & workers.There was plenty of hard work that went into elections. No doubt, it's disheartening but let's keep the fight on. I congratulate PM Mr. Narendra Modi,BJP & NDA."

After facing a defeat at the hands of Narendra Modi-led BJP on Thursday, Congress president Rahul Gandhi offered to resign from his post. However, Congress supremo and UPA chairperson Sonia Gandhi turned down the offer.

Despite getting Priyanka Gandhi in the forefront, the party failed to achieve a mark.
Just like the 2014 General Elections, the lok sabha will be again bereft of the leader of opposition (LOP). As per reports, the Congress has won 51 seats, which is four short of the mark needed for the LOP status.

The Leader of the Opposition is the politician who leads the official opposition in either House of the Parliament of India. According to parliamentary rules, the largest Opposition party in the House needs at least 55 seats, to be eligible for the LOP post.