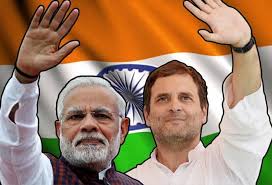 The 38 days Long Lok Sabha Elections are ending today to give way to the exit poles and finally the results which will be declared on Thursday, 23rd March.

There have been many speculations as to which party will win the political throne. 2019 Lok Sabha elections have been called crucial by many leaders as they’re not just an election between different parties but an election which will decide the future of India. The manifestos of different parties have been highlighted by the party leaders in their speeches. Congress has proposed its NYAY Scheme which will give a minimum income to the 20% poor of the nation. In many of its speeches, the BJP has questioned its authenticity and source of funds. Ex-RBI Governor, Raghuram Rajan had given a thumbs up to the scheme calling it “doable.” The party has also promised jobs to the youth. Party President, Rahul Gandhi had announced that he won’t promise 2 crore jobs as he doesn’t want to make any fake promises like Modi made in 2014 regarding Black money and 2 crore jobs for the youth.  Meanwhile, the Saffron party’s promises include the building of the Ram Temple in Ayodhya which holds a sentimental value for both, Hindus and Muslims. It also said, “We (BJP) aspire to make India the third largest economy of the world by 2030. The party has been time and again been criticized for the lack of job creation and decrease in the GDP. Many influential people have voiced their opinion against hate speeches and Hindutva propaganda. Lack of freedom of speech too cited by many people with the death of Journalist Gauri Lankesh. Individual channels like Dhruv Rathee have called the manifesto of Congress as more realistic as compared to BJP as the BJP manifesto failed to address issues regarding Pollution, Corruption or Environment.

Regarding the security, 2016 Surgical strikes were applauded by all the people of the nation however, the 2019 air strikes had raised a lot of questions regarding its authenticity. Many politicians criticized the party for using it as a vote bank after posters were surfaced where the party asked for votes on the note of the airstrikes.
With the Polls ending today, one thing can be speculated that despite the fact that despite the fact that accriding to a lot of surveys and reports, there are high chances of BJP to come to power again, it’s quite impossible to believe that the scenario will be the same as 2014, a clear majority. A lot of factors like GST, Demonetization, Hate speeches can be considered responsible for it.