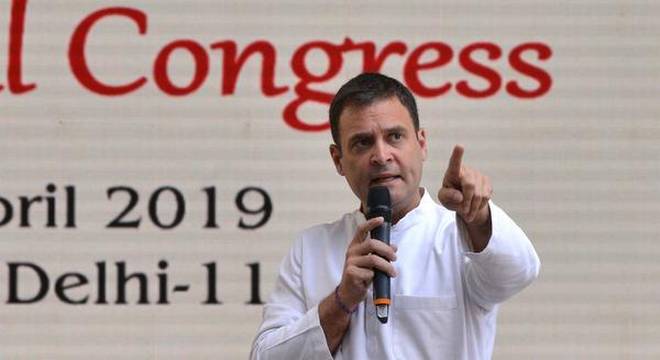 In an interview with the Indian News Channel, NDTV, Congress president Rahul Gandhi said today that Prime Minister Narendra Modi has "personal hatred" towards him. The interview was taken while Gandhi was on a campaign trail in Madhya Pradesh for the last two phases of the national election. He claimed that he meets the PM respectfully but doesn't see the same from him.

Gandhi said that there exists an ideological conflict between the BJP-RSS and the progressive forces in the country. He said, "We are fighting against the ideology that is a threat to the Constitution. PM Modi is ignoring the intelligence of the RBI and announcing demonetisation... Wherever I go, the people of the country are saying that there is a force is trying to control the country."

Referring to the attacks made by the PM on his late father and former prime minister Rajiv Gandhi, Rahul Gandhi said that Modi talks about Rajiv Gandhi, about Nehru, and Indira Gandhi and that he knows the truth, his grandmother's truth and also what lies the PM is spreading.

He added that during the 2014 LokSabha Elections, some people claimed that no one can defeat Narendra Modi but his party (Congress) didn't back down and fought in parliament and on the ground. He then said that Modi is now scared and no one today says that Modi will win.

Eight of Madhya Pradesh's 27 seats will be voted for tomorrow, in the sixth phase of general elections. Another eight seats will go to polls in the seventh and the last phase of elections on May 19, next Sunday.