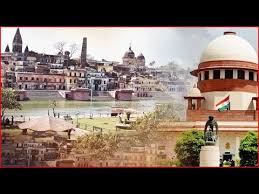 According to a notice on the Supreme Court’s website posted on Thursday evening, the Apex Court bench headed by Chief Justice of India Ranjan Gogoi and comprising Justices S.A. Bopde, D.Y. Chandrachud, Ashok Bhushan, and Abdul Nazeer, will hear the case on the Ayodhya dispute.

On 6th March, the Supreme Court had reserved its order on whether the Ram Janmabhoomi-Babri Masjid case should be referred for arbitration. It was made clear that the Supreme Court understood the gravity of the case and its outcome on the body politic of the nation. The parties were asked to submit the names of the arbitrators they would want to handle the case by 5th March.

Fourteen appeals were filed before the Supreme Court against the 2010 judgment of the Allahabad High Court, which had said that the 22.7 acres fought over site in Ayodhya should be equally partitioned among the Sunni Waqf Board, the Nirmohi Akhara and Ram Lalla.

The Ayodhya site holds an important site in the upcoming elections as BJP has included in its manifesto that it will build the Ram Mandir (temple) on the site.