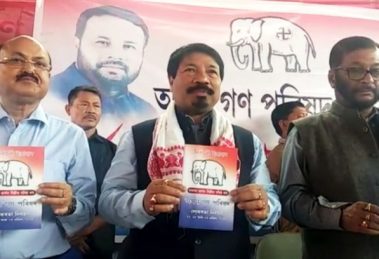 The regional party of Assam, Asom Gana Parishad released its manifesto in Golaghat, the birthplace of the party. The party manifesto themes run similar to its rival parties in the state, BJP, and Congress.

However, unlike its former ally, AGP has taken a firm stand against the Citizenship Amendment Bill and stated that it will protect the rights of the Indigenous people of Assam.

The party has refused to ally with BJP, unlike in 2009. And is currently contesting from only three seats of the 14 seats in Assam.

Much like it’s rivals, the regional party also promised for the implementation of the Clause 6 of the Assam Accord, which provides for constitutional, legislative and administrative safeguards to culture, language, identity and heritage of the Indigenous people of Assam.

And similar to the promises of Congress, the regional party also promised to press for the tribal status to the six indigenous communities of Assam. It also promised to grant Assam the special status of a state, that was withdrawn by the BJP party.

The party manifesto also pressed the need to introduce two army regiments named after Mahabir Lachit Borphukan and Mahabir Chilarai, and recruit local youths in these two regiments. It also assured that if they came to power, they will demand employment generation and 100 per cent reservation for local youths in all central PSU’S and MNC’S operating in the state.

Presently the party is striving to restore the glory of the past. Many party leaders including its president have left AGP to join BJP.