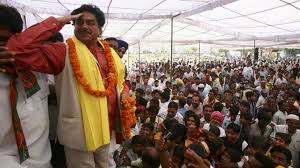 Actor-turned-politician Shatrughan Sinha who also recently shifted from the BJP to the Congress hit out at his former party on Saturday after asking who is “pappu” (naive) and who turned out to be a real “feku”(liar) after the Congress beat the BJP in the Madhya Pradesh, Rajasthan and Chhattisgarh Assembly polls.

The taunt originates from BJP's routine jibe at addresses Congress chief Rahul Gandhi as "pappu" which is responded by the Congress terming the Prime Minister Narendra Modi as "feku" accusing him of making lofty and fake promises.
"Now please tell us who is pappu and who has turned out to be the real feku. Who won elections in three states," Sinha asked.
Sinha then claimed that Modi is known for making false promises and said that he continued to do so for 2022, 2024, 2029 even though he is not going to be PM at that time.
Sinha praised Gandhi describing him as "dashing, dynamic and of course charming". The former BJP member said that he joined the Congress, despite receiving invitations from other parties like TMC, SP, BSP because the party was an old one founded by Mahatma Gandhi, Jawaharlal Nehru, Sardar Patel, Netaji Subash Chandra Bose amongst others.
Referring to the Demonesitisation and GST, Sinha said that these two incidents had rendered lakhs of youth jobless, destroyed small and medium traders and brought down factory production by 50%.
"I am a persistent critic of Narendra Modi on issues such as the Rafale deal, demonetization and GST because an arrogant PM did not consult senior party leaders and cabinet ministers on these issues. That is why I resigned from the party and joined the Congress," he said.
He then predicted that winning the 2019 Lok Sabha will be "impossible" for Modi.