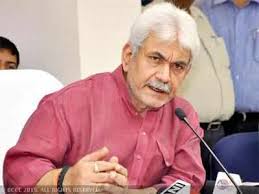 Union minister Manoj Sinha reportedly threatened that anyone who points a finger at BJP workers will find himself paying for it in just "four hours". Sinha made the statement while addressing 'Kisan Panchayat Sammelan' in Saidpur area, on Thursday evening.
Sinha is the current Minister of Communications and Minister of State, Railways in the Government. He is also a three-time Bharatiya Janata Party member of Parliament in the Lok Sabha, representing Ghazipur in the Lower House. For the on-going polls, he is seeking re-election from Ghazipur seat.
"The BJP workers are all ready to crush corruption and the money earned through criminal activities. I can assure you that if any finger is pointed at a BJP worker, in four hours that finger will not be salamat (safe)," the 59-year-old sitting MP said. "No criminal of Purvanchal is in a position to enter the boundary of Ghazipur and glower at BJP workers... If he dares to do it, his eyes will not remain safe," he said.
The Union Minister is contesting against Azfal Ansari, the brother of mafia-turned politician Mukhatar Ansari who has been fielded by BSP.