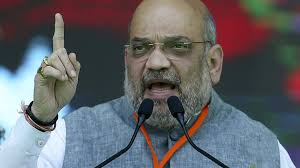 A controversial tweet by the BJP has gone viral and received a lot of backlashes. Today, the Goa Congress filed a complaint with its Chief Electoral Officer against a speech by BJP President Amit Shah, which the opposition party claimed was a "grave intimidating threat against minorities especially Christians and Muslims in Goa".

While addressing a rally in Darjeeling in West Bengal on April 11th, Shah reportedly said minorities, especially Christians and Muslims, will be removed from the country as infiltrators according to Goa Congress spokesperson Sunil Kawathankar, who had filed the complaint.

In his complaint, he said, "He had said the BJP will remove every infiltrator except Hindus, Buddhists, and Sikhs. If the BJP leader had said that he will remove infiltrators, that was okay but giving it a religious color has created communal discord and fear and anxiety in the minds of people of minority communities."

Kawathankar then further pointed out that by stating that the BJP would implement the National Register of Citizens across the country if re-elected, it had violated Article 25-28 of the Constitution.

He called it a direct threat to Christians, Muslims and those communities who have found mention in Shah’s speech.