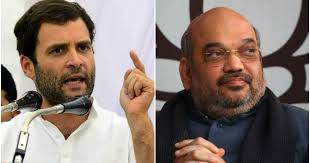 With almost every event turning into a Twitter-feud, hours after PM Modi announced the success of Mission Shakti and Congress president Rahul Gandhi lashing out at Modi by wishing him on “World Theatre Day”, BJP President took the responsibility of carrying forward the world war.

I would also like to wish the PM a very happy World Theatre Day.

Shah Tweeted to it.:

Thus speaks the inheritor of the dynasty that thinks - All the nation's a stage!

The success of scientists - drama

Masquerading as leaders, all that ‘The Dynasty’ has done is to plunder, weaken and ruin the nation.

While taking a dig at the opposition, Shah tweeted:

“The Anti-Satellite (ASAT) Missile was successfully tested in space but it seems a few people on Earth have also got hurt.

After spending a lifetime of humiliating our soldiers, Leaders of the Opposition have expanded their influence to ridiculing our scientists.

"It is a proud moment for all Indians. I congratulate all the scientists involved with #MissionShakti and thank Prime Minister Shri @narendramodi for ensuring that India continues to safeguard the interest of its people and secures them on all fronts."

Prime Minister Narendra Modi announced on Wednesday that the nation had demonstrated anti-satellite missile capability by shooting down a live satellite, describing it as a rare achievement that puts the country in an exclusive club of space superpowers.

However, the opposition criticized the Saffron Party government for making the event a way of getting votes.