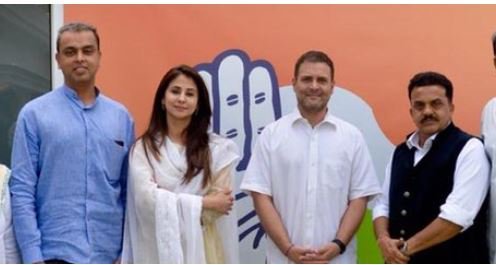 In the time of celebrities joining political parties, actress Urmila Matondkar joined the Congress on Wednesday after a meeting with the Party President Rahul Gandhi at his residence.
In a press conference, Congress chief spokesperson Randeep Surjewala said that the actor will be contributing to strengthening the party and spreading its ideology. Urmila said, "I am taking my first step in active politics. I am from a family that has shaped my political views based on the ideology of Mahatma Gandhi, Jawaharlal Nehru, and Sardar Patel. It is another matter that despite being from an academics-oriented family, I joined films. But I had social awareness right from childhood.”

Celebrities turning into politicians has often risen several opinions like Hema Malini receiving comments from different MPs about her dancing career. Urmila claimed that she is well aware how actors-turned politicians are expected to pull in voters because of their glamour however, she told the reporters that she would request everyone to keep such thoughts away when it comes to her.

Matondkar claimed that she felt the need to join the Party as she felt the freedom of expression in the country was under attack with numerous examples of the regard in the last five years. She then said that Congress had participated in the freedom struggle and had stood for freedom.

She said, "Today is a significant day for me as I have formally entered politics. My life has been inspired by Mahatma Gandhi from the days of my childhood."

She also appreciated the leadership of Gandhi saying that he is the one who takes everyone along as such a leader is required in the current scenario.

Surjewala said, "She has been an inspiration for the youth on how with your hard work, commitment and talent, she has won the hearts of many and achieved a lot."