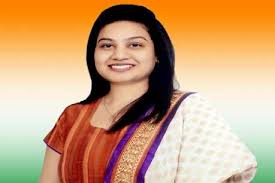 Himadri Singh, daughter of former Union minister and late Congress MP Dalbir Singh, formally joined in the BJP in Bhopal on Wednesday. Himadri had contested the by-election in 2016 as a Congress candidate from the Shahdol parliamentary constituency.

In the BJP's state office on Wednesday, Himadri accepted the party's membership in the presence of party's state president Rakesh Singh. The BJP state president said, 'Himadri has been influenced by the BJP's policy and Prime Minister Narendra Modi and President Amit Shah, the BJP is in good stead'.

After having joined the BJP at the State BJP Headquarters in the presence of party state president Rakesh Singh, on Wednesday, she told media persons, “My entire family, including my husband and uncle-in-law, is in BJP. My parents were Congress MPs and I too contested Lok Sabha by-poll on Congress ticket in 2016 but as I am married and shifted to a new family, I decided to join the BJP.”'

Himadri is a popular face of Congress in the Vindhya region. In this region, the Congress suffered a big loss in assembly elections. On the question of making Himadri as Shahdol candidate, Singh said, 'There is no talk on this now. He has not taken any party's membership on any condition." Himadri told reporters that he has not joined the BJP with any condition. On the question of contesting the elections, she responding saying that she would like to contest.