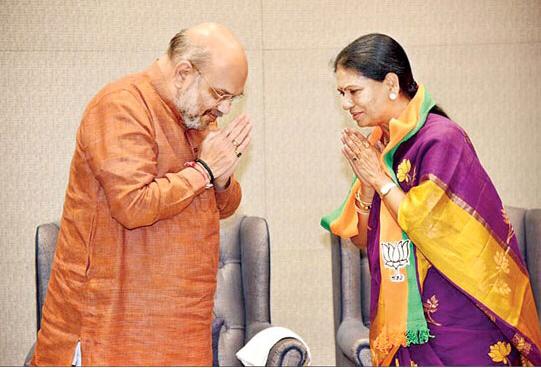 In another major setback to the Telangana Congress, its senior leader and former Minister D K Aruna joined in BJP.

She joined the BJP in the presence of party national president Amit Shah in Delhi Tuesday. She is expected to be fielded from the Mahbubnagar Lok Sabha seat. Aruna had lost the Assembly elections from Gadwal in December 2018.

'We will strive to strengthen BJP in Telangana and make it an alternative to TRS. We will work for winning maximum seats for BJP in Telangana in the coming Lok Sabha elections,' she told reporters.

'Definitely, her joining BJP will make the party stronger in Mahbubnagar district. It shows the sorry state of affairs of Congress in Telangana," BJP MLC N Ramchander Rao told. Eight Congress MLAs recently defected to the ruling TRS in Telangana.

DK Aruna is a three-time MLA from Gadwal. She was a minister during YS Rajasekhar Reddy's term and went on to hold portfolios of Small Scale industries, Sugar, Khadi and Village Industries in Rosaiah's cabinet. Aruna later served as Information Minister in Kiran Kumar Reddy's government.