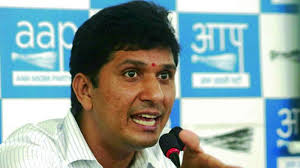 With hardly a month left for the Lok Sabha Elections, it is quite common to see parties bashing each other. In one such instance, the Aam Aadmi Party today claimed that Congress President Rahul Gandhi is not keen on alliances in different states in 2019 as he believes that he has no chances of winning the Lok Sabha battle and was looking forward to the 2024 elections.

AAP spokesperson Saurabh Bharadwaj was the one who took to Twitter to express his opinion:

“RG believes he has no chance in 2019, he is eyeing 2024. Sharing seats will diminish RG's 2024 dream. BJP strategists asked Media to make 2019 as "Modi Vs RG". RG is basking under the manufactured illusion, though it’s a trap by BJP. In parallel, RG jokes r being pushed hard by BJP”

His reaction comes with Gandhi’s decision of not sharing seats with other parties, be it in West Bengal, Uttar Pradesh, Bihar or Delhi.

The AAP leader added that this step was against the idea of the Grand Alliance which had initially planned that there should be one candidate in each constituency against the BJP to avoid splitting of anti-BJP votes.