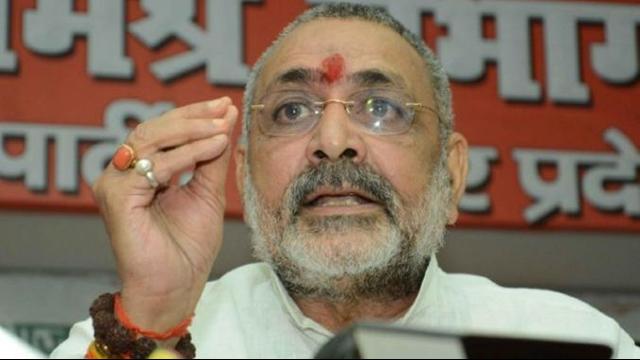 Addressing to media, Union minister Giriraj Singh told that he did not expect it and was also disappointed for not being granted a ticket from Nawada Lok Sabha seat and said that. I did not expect this and also the state president of Bihar for BJP, Nityanand Rai had said that 'you can contest from wherever you would like'.

'Compulsions of seat-sharing may be there. But I wish to underscore that no other union minister from Bihar may have to give up his sitting seat, This is despite the fact that I have worked so much to nurture my constituency,"' the veteran Bharatiya Janata Party (BJP) leader told to media.

On reports that he might be asked to contest from Begusarai, the seat which he had wanted to fight in 2014, Singh replied that 'I was a party worker, am a party worker and shall always remain a party worker.'

According to the announcement of the division of seats on Sunday by the NDA in Bihar, Nawada Lok Sabha seat has now moved into LJP's account, after which Giriraj's BJP is likely to contest from the seat of Begusarai, under the seat sharing.