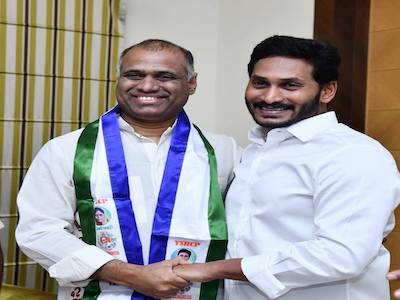 Potluri Varaprasad, one of the chief industrialists of Andhra Pradesh has joined into YSRCP. Potluri Varaprasad met YSR Congress Party (YSRCP) chief YS Jagan Mohan Reddy at his Lotus Pond residence this morning and joined the party in his presence.

Potluri Vraprasad is an entrepreneur as well as an educationist. He also owns a production company by the name of PVP Cinema.

Speaking to reporters after officially joining the party, he said that he was born in Vijayawada and also received his education from the same city. So it would be his main agenda to develop Vijayawada.

He said that YS Jagan Mohan Reddy has a clear view of how to develop the state capital. PVP said that he had the same agenda and had seen the development of the state as its main agenda rather than in the form of politics.

When asked about the film industry, he said that he will request the Telugu filmmakers to jointly organize programs in both cities. And at the same time, he will try to create an environment that creates enthusiasm for the works related to film production also.