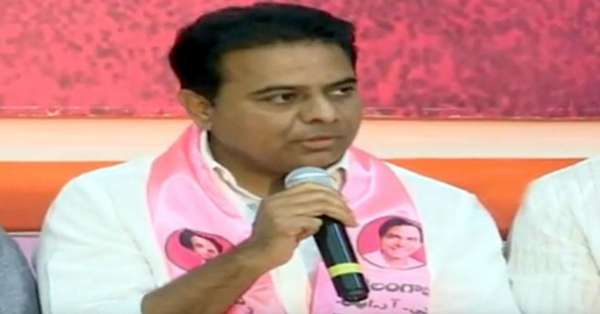 Executive President of the TRS, Kalvakuntala Taraka Rama Rao addressed a gathering in Chevella Lok Sabha constituency calling upon the people of all 16 Lok Sabha constituencies to make TRS strong in the centre. KTR assured that if people will vote TRS party to power, they would bring high-speed bullet trains to Telangana.

He urged the people of the constituency to vote the party to victory with a great number of votes. He went on to say that whoever the TRS candidates are, remember every vote is presented to KCR.

During the meeting, KTR  criticized the Congress party and  PM Modi. He said that the days of Narendra Modi as PM is coming to an end and the Congress is out of the scenario. Rebuking  Congress, KTR comparing that voting for Congress means that it is like throwing a vote in the drain.

KTR pointed out that the eye of each and every leader from various parties is on Telangana Rashtra Samithi. He emphasized that there are no disparities and differences in Telangana. He urged and requested the party workers to be cordial with other party members such that the opposition should also become our custodian and vote to TRS party. KTR also urged TRS members to go to door-to-door inform and educate about the government's policies.