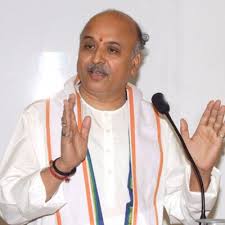 Former VHP leader Praveen Togadia said that before the announcement of Lok Sabha election schedule, the Modi government should bring an ordinance to facilitate construction of a Ram temple in Ayodhya.

Saying “No Ram Mandir, no vote to BJP”, Togadia declared that his political outfit Hindustan Nirman Dal (HND) would bring in an ordinance for building a grand Ram temple in Ayodhya in a week if voted to power.

Lashing out at BJP, the Hindutva leader said, that three ordinances have been promulgated on triple talaq for Muslim women but why even one not for the mandir.

Referring to the BJP patriarch LK Advani's yatra of 1990, he said that for the cause of Ram temple, a yatra was taken out from Somnath to Ayodhya.

"Kar sevaks were killed. In the name of Ram, the party won elections from panchayat level to Parliament. Why Modiji did not get a law enacted for the construction of Ram temple in five years of his rule?" he asked.

He claimed that neither BJP nor Congress can build the Ram temple and thus his party will fight the elections and build the temple after winning the elections.

He added that they will build Ram temple in Ayodhya, give a Hindu government, employment to youth, and respect to jawans and improve farmers' life.

However, he dodged a question on how many seats his political party will contest across India saying his party will definitely contest the Bhopal Lok Sabha seat.