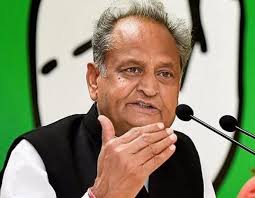 Rajasthan CM Ashok Gehlot said that people had the right to know about the truth regarding the Balakot airstrike on Friday.

He said that the world media has been claiming that nothing has been found on the ground as claimed by India and creating confusion over the incident.

He rhetorically questioned if the people have a right to know and shouldn't the government come out with a clarification so that the rumors and confusion could be put to an end.

The Congress Leader said that instead of coming out with the truth, every person from BJP is busy in tossing different versions, ending up intensifying the confusion and distrust.

He further added that the in power should address the suspicion instead of leveraging the incident for targeting the Opposition and winning the election.

Meanwhile, the Opposition has demanded the Centre come open with the details, including the number of terrorists killed, of airstrikes by the Indian Air Force in Balkot last week.

The CM alleged the Prime Minister of behaving irresponsibly in the situation.

He believed that in such a situation, statements of the PM should infuse trust, boost confidence and strengthen unity among the country and fellowmen.

He then accused both Modi and BJP chief Amit Shah of diverting national discourse in order to win the election. However, he added that the people have understood what has been happening around and would soon reply with their votes.