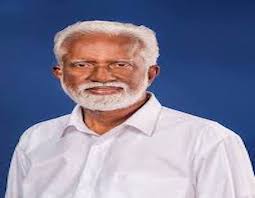 In a surprising twist of events, Mizoram Governor Kummanam Rajasekharan resigned from his post on Friday leading to fresh speculation that he might be the saffron party’s candidate against Congress MP Shashi Tharoor from Thiruvananthapuram.

If the reports are to be believed then it will be a three-way fight between Tharoor, Rajasekharan and former minister C Divakaran of the CPI.

Rajasekharan’s tenure as lasted less than 10 months and the appointment came as a shock to many as it was just a couple of days before the crucial by-election in Chengannur.

Rajasekharan came to political limelight in 1982 as the leader of Nilakkal agitation. The BJP was able to open its 'account' in the state with its best performance till date in 2016 elections while he was heading the state unit.

He began his political career as an activist of the RSS in 1970. In 1987, he resigned from government service and to became a full-time Sangh Parivar worker, while being instrumental in spearheading Kerala's Vishva Hindu Parishad (VHP), Kshetra Samrakshana Samiti, Balasadanams and Ekal Vidyalayas. He has been the secretary of Hindu Aikya Vedi and Sabarimala Ayyappa Sewa Samajam.

His resignation has been accepted by President Ram Nath Kovind. Assam Governor Jagdish Mukhi will discharge the additional duty of the Mizoram governorship.