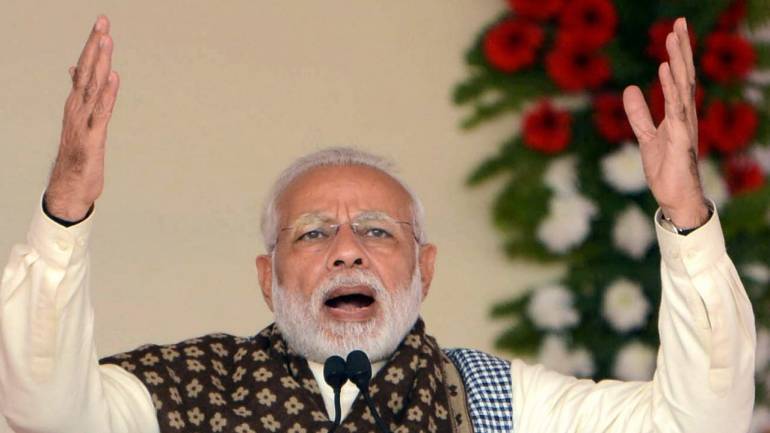 As the Lok Sabha elections are fast approaching, the National Democratic Alliance (NDA) members have assembled in  Patna's 'Gandhi Maidhan' and begun flaunting their strength through the 'Sankalp rally'. A huge crowd was present to listen to Prime Minister Narendra Modi at this historic place.

Addressing the public, PM Modi said that Bihar under the leadership of Nitish Kumar is running towards to become a wonderful state leaving the atrocious old days. He praised Nitish Kumar and Sushil Modi's duo saying that they have created wonders in Bihar.

He also credited them for bringing down the crime rate and freeing the people of Bihar from crime and corruption. He further appreciated the duo for working continuously for Bihar's growth and pushing the development momentum forward.

He said 'We are working on various schemes and programmes for the development of Bihar. Under the schemes, children will be provided education, income to the youth, medicines to the elderly and irrigation to the farmers.'

He mentioned that Metro railways are coming to Patna, vehicles will run on CNG gas and LPG gas will be supplied to houses through the pipes. Efforts are being made to resume the entrepreneurship in Bihar. He further elaborated on schemes for farmers saying it will benefit about 12 crore farmers in Bihar.

He also has indicated about Patna railway junction which was renewed, expanded and is looking modern and also the air travel being made affordable and cheap.