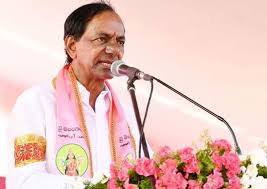 Chief Minister of Telangana Chandrasekhar Rao on Saturday asked the Chief Secretary S.K. Joshi asked to release the water from one of the canals of Nagarjuna Sagar Dam, so that crop in the two lakh acres area in Khammam district could be watered.

According to a release issued from the Chief Minister's Office, Mr KCR took this decision after the request from TDP legislator SV Veeraiya of Sattupalli. Veeraiah has requested to leave the Nagarjuna Sagar dam left Canal for 10 days.

There has always been friction and debate between Telangana and Andhra Pradesh officials for the release of water from the Nagarjuna Sagar project from the earlier days.

This led to a  tensed situation, Nagarjuna Sagar. As a result of which, the police of both the states were deployed to control the situation.