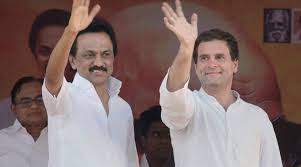 The Dravida Munnetra Kazhagam Party finalized its seat-sharing with key ally Congress for the coming Lok Sabha elections, allotting nine seats in Tamil Nadu and one in neighboring Puducherry on Wednesday.

He said that the constituencies that will be allotted to Congress will be announced later.

He said that the party will finalize the seat-sharing exercise for other allies soon
Under Congress, there are 39 Lok Sabha constituencies in Tamil Nadu and one in Puducherry.
The pact has been announced a day after the ruling AIADMK cobbled alliances with the ruling party BJP and PMK allotting them five and seven Lok Sabha seats respectively.