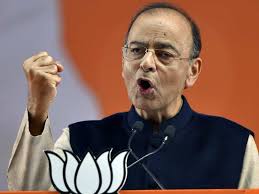 Finance Minister Arun Jaitley hit back at Congress and other opposition parties over Rafale fighter jet deal and the national auditor's report on it who had accused the party over the issue.

He tweeted "Mahajhootbandhan (grand lies alliance)" stands exposed by the report, which reaffirms the dictum that truth shall prevail.

Mr Jaitley tweeted minutes after the CAG (Comptroller and Auditor General) report was submitted to parliament. The report shows that the Rafale deal sealed by the central government is 2.8 percent cheaper than the one negotiated by the previous Congress-led government.

"It cannot be that the Supreme Court is wrong, the CAG is wrong and only the dynasty is right. Satyameva Jayate" - the truth shall prevail. The CAG Report on Rafale reaffirms the dictum," Mr Jaitley tweeted.

The report didn’t incorporate the controversial and key point of pricing, as the Defence Ministry maintained that these details could not be revealed. The parts in the report referring to cost are redacted, which may provoke fresh opposition attacks.

The opposition have called the report biased as the auditor was Finance Secretary, Rajiv Mehrishii during the deal for 36 Rafale fighter jets being inked in 2016.

The report further says that India managed to save 17.08 per cent money for the India Specific Enhancements in the new contract as compared to the 126-jet deal negotiated by the UPA government.