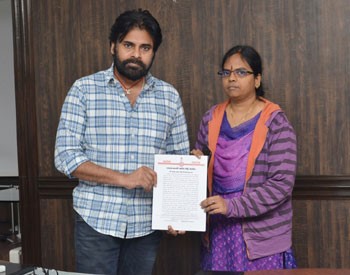 Jana Sena Party President Pawan Kalyan has appointed Rekha Jivaaji as the president of the Jana Sena 'Veera Mahila' on Friday for the Jana Sena Party women's wing. She is currently pursuing her CA and is in her last year of the course. There are four vice-presidents in this committee. Kanamori Kavitha Sindhuri (Bhimavaram), Sheikh Zarina (Narasrao Petta), Nootati Priya Soujanya (Rajamahandre) and G. Srivani (Hyderabad) was appointed. Similarly, a number of commanders, co-conveners, and coordinators were appointed according to the parliamentary constituencies.
Sujata Panda was appointed as the Party Political Affairs Committee.   Women have been placed in the parliamentary executive committees and working committees. Badminton player Puddy Shetty Ushashri was appointed as chairman of the party promotion department. Party Ideology Wing and Social Media Divisions were formed. Apart from this, the Presidential Administration Division was set up. Similarly, the public launch councils and committees were formed. Now there are 22 women's divisions. Pawan said that he has decided to give a suitable position to women within the party.
Pawan Kalyan also launched a wing called Veera Mahila social handles JSPVeeraMahila. Janasena Veera Mahila a platform dedicated for women to question & fight issues faced by them with an underlying aim to promote gender equality and women empowerment. Pawan Kalyan has placed and entrusted women in suitable and important positions within the party and has many a time openly voiced about the importance and necessity of women in the ongoing active politics and society. It is very interesting to take note that the newly formed Jana Sena party is actively encouraging and involving women in the party and society.